Wasted Medicare dollars could be better spent on medication for seniors, women and people with cancer

Our analysis of data provided by the Centers for Medicare and Medicaid Services (CMS) shows that more than $2.1 billion was wasted on discarded units of drugs from 2017 to 2019.

The majority of this wasted taxpayer money was spent on unused units of chemotherapy and cancer-treating drugs that were thrown away and unavailable for treating other patients in need of the drugs.

Most of this medication and financial waste is due to single-dose vials or containers of medications that include higher doses than are necessary to treat the average patient.

We identified key areas related to cancer treatment, women’s health and general public health (including COVID-19 vaccinations) that could benefit in drastic ways if given the amounts of money Medicare has wasted on discarded drugs.

Why Is So Much Money Wasted on Discarded Drugs?

Research suggests that due to the “buy and bill” drug supply model, drug manufacturers are actually incentivized to produce medication quantities that are more likely to wind up discarded when single-dose vials or containers include higher doses than are necessary.

Profits are increased by billing for the whole vial, even if only a portion of it is needed and used. Doctors and hospitals also enjoy bloated profit margins under this system.

Medicare wasted more than $1 million per drug on discarded doses of 56 different drugs in 2019, most of them vital chemotherapy and cancer treatment drugs.

The money Medicare wasted on doses of drugs that were thrown away could have covered all or at least large portions of the costs many women face when getting treatment for breast cancer, menopause, depression and other conditions.

To further illustrate the amount of taxpayer money that was wasted on discarded Medicare Part B drugs in 2017, 2018 and 2019, we compiled a list of ways this amount of money could be put to use for a number of public health issues, such as building hospitals, providing N95 surgical masks to all Americans, treating opioid addiction and more.

How Is the Government Responding to Medicare Drug Spending Waste?

The wasted $2.1 billion only accounts for discarded drugs that were covered by Medicare Part B, the medical insurance component of federally provided Original Medicare. Part B drug spending is just 16% of total Medicare drug spending.

Bipartisan legislation was introduced in February of 2019 by Senator Dick Durbin (D-IL) and co-sponsored by Senators Michael Bennet (D-CO), Sherrod Brown (D-OH), Rob Portman (R-OH) and Mike Braun (R-IN) which aims to require drug manufacturers to issue rebates to Medicare for discarded drugs in single-dose vials or else be subject to civil penalties. 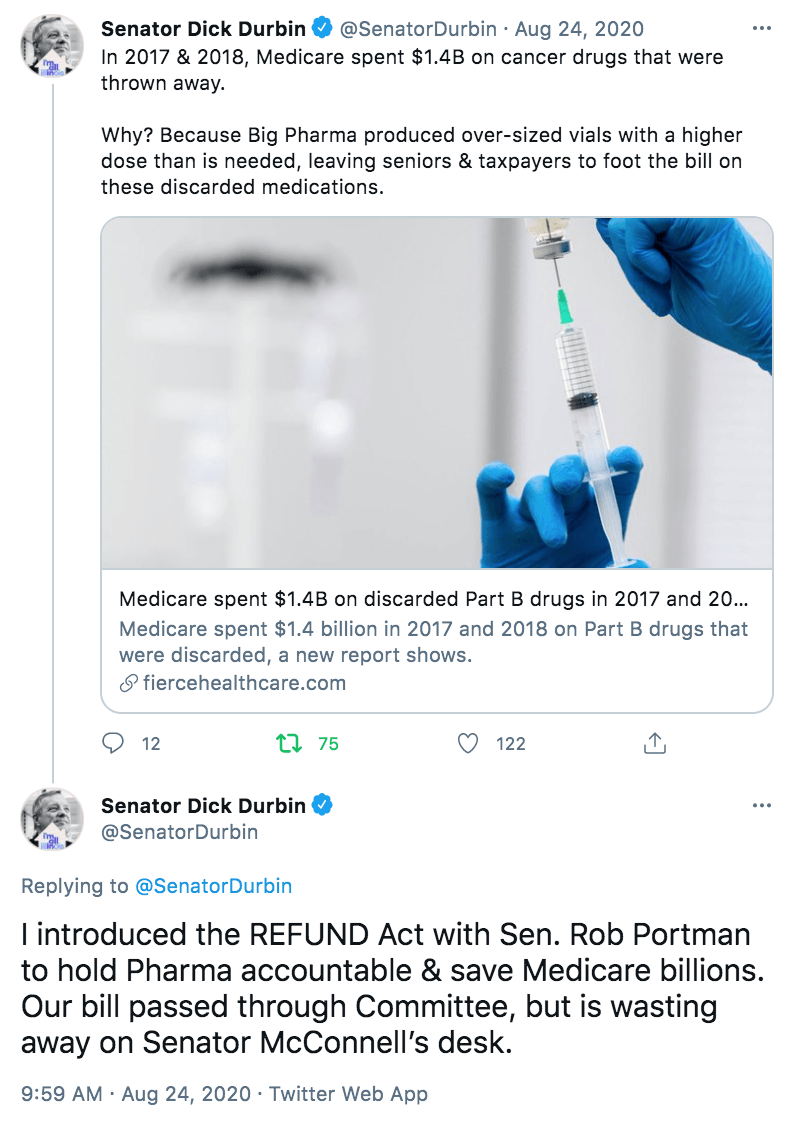 Although the total amount of Part B spending on discarded drugs is high, it only accounts for about 2% of total Part B drug spending.

To address this wasted spending and to significantly impact both the cost and care outcomes for millions of Americans, two possible changes could be implemented:

Our analysis is based on data made available through CMS.gov.

Drug usage was categorized by a drug’s primary use.

1 Based on the median cost of $45 per flu shot in 2017 according to the Kaiser Family Foundation.

4 According to figures from the International Monetary Fund published October 2019.