At a stage in one’s life where having a sound understanding of health care is of the essence, nearly 7 out of 10 Medicare beneficiaries agree that Medicare insurance is confusing and difficult to understand.

That’s according to our Medicare literacy survey where we polled 1,000 Medicare beneficiaries about everything from Medicare enrollment and benefits to simple terms and definitions.

And when you consider that over 62.6 million Americans are enrolled in Medicare, there could be as many as 43 million seniors — including your parents, your grandparents, or even yourself — who fail to receive the best care for their needs simply by not fully understanding their own coverage.

“Like many types of insurance, Medicare can be difficult to understand, and beneficiaries often fail to take advantage of their coverage as a result.” – Licensed insurance agent and Medicare expert Rebekah Etheredge

While the lack of overall knowledge is alarming in itself, the bell tolls even louder as the Medicare Annual Enrollment Period (AEP) nears. During AEP (also called the fall Medicare Open Enrollment Period), which runs from Oct. 15 to Dec. 7 each year, millions of America’s seniors will switch, add and drop private Medicare plans. And those transactions can play a significant role in one’s health and finances going forward. 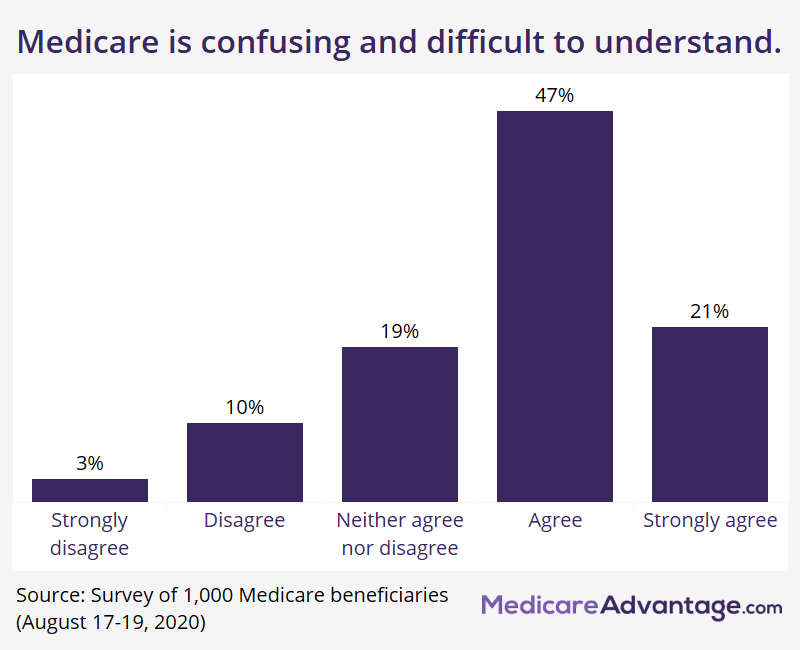 The Cost of Medicare Confusion

For many beneficiaries, the confusion about Medicare begins with a lack of understanding about the most basic insurance terms. 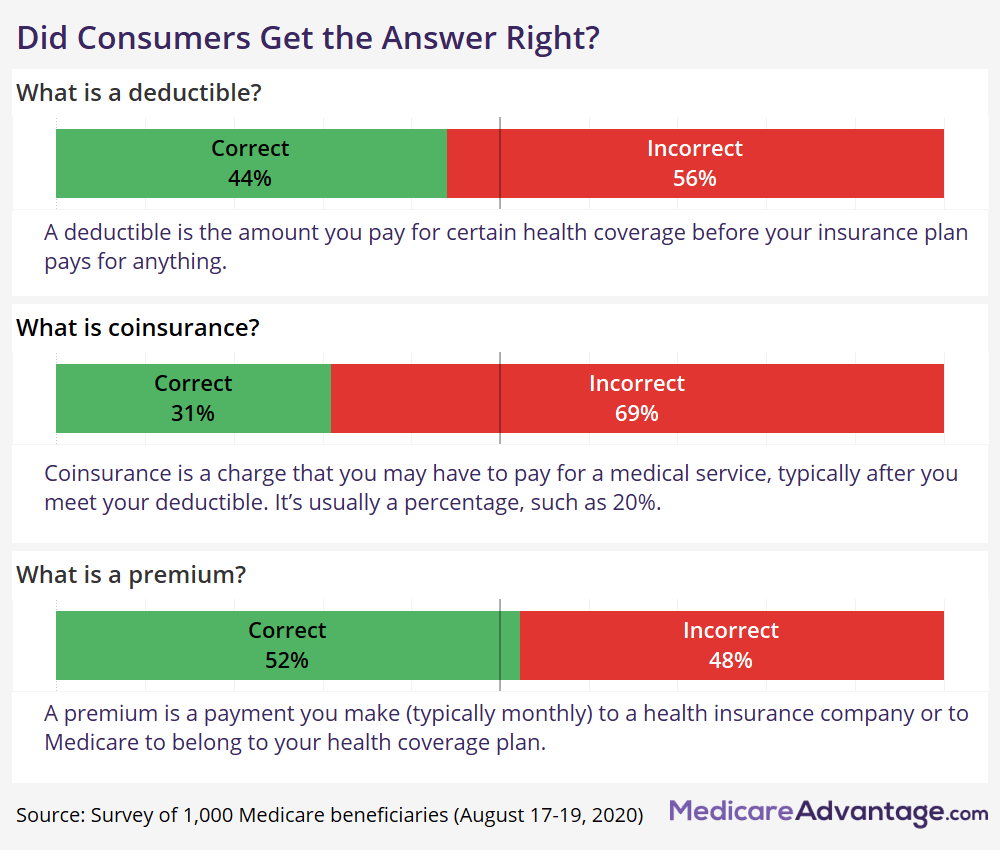 What makes these results so jarring is that these terms are not unique to Medicare. Our respondents have likely been paying premiums, deductibles and coinsurance for decades under employer or individual insurance plans.

If ignorance is bliss, it can also be expensive. By not properly understanding the basics of such terms, Medicare beneficiaries can set themselves up for increased (and unnecessary) out-of-pocket spending.

In 2016, half of all Medicare beneficiaries had income of less than $26,200, leaving many seniors with little wiggle room in their health care budget.

The following examples illustrate just how costly it can be when Medicare beneficiaries don’t fully understand their coverage and potential expenses. 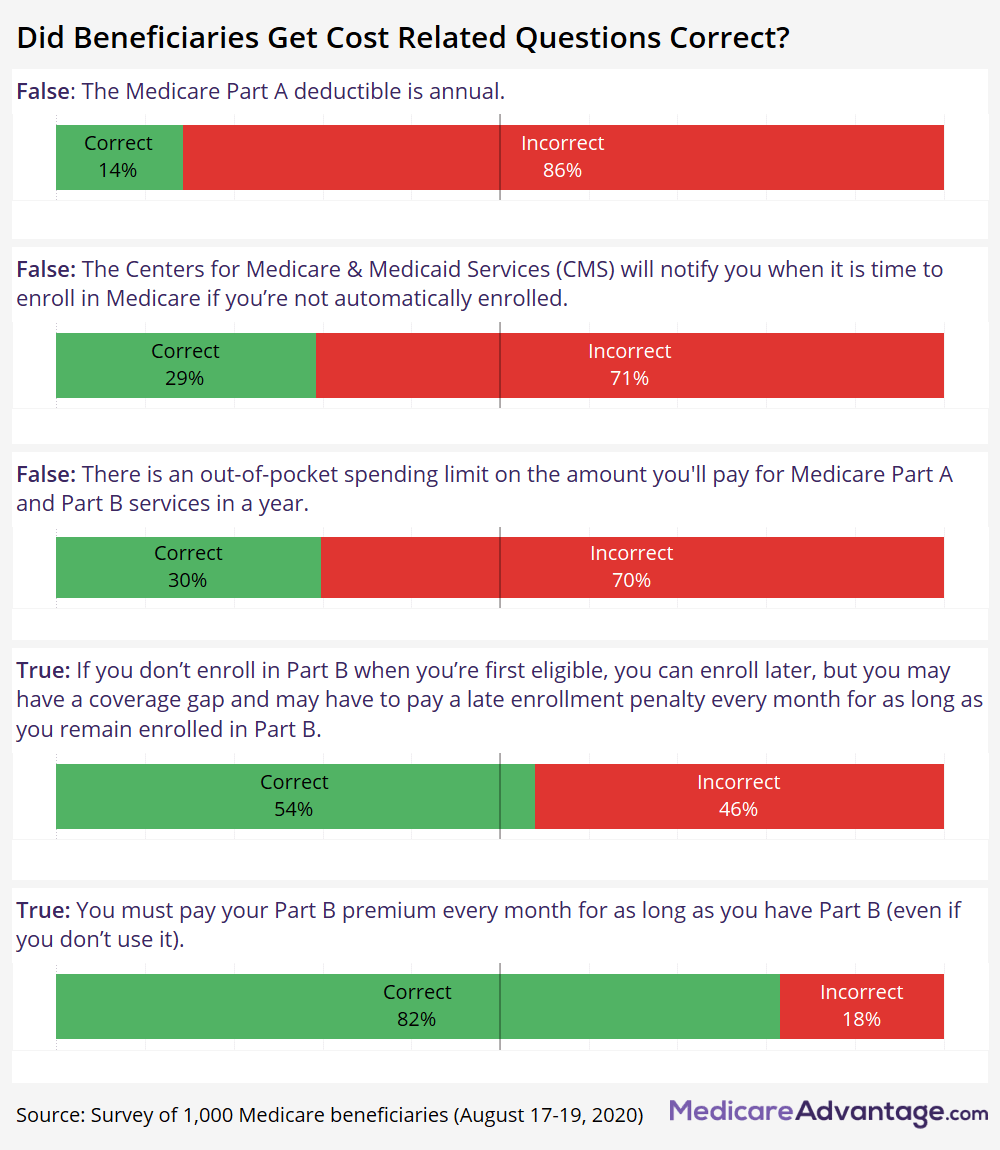 A senior who faces multiple hospitalizations within the same year could be left responsible for satisfying multiple Part A deductibles in the same calendar year.

With the Part A deductible set at $1,408 per benefit period in 2020 (and typically rising every year), having to pay more than one of them in the same year could be crippling to one’s finances.

70% of our respondents incorrectly believed that Medicare Part A and Part B contain an annual out-of-pocket spending limit to protect beneficiaries from exorbitant costs.

But this is not the case. Neither Medicare Part A nor Part B contain any out-of-pocket maximums. Theoretically speaking, Original Medicare beneficiaries with no supplement plan are responsible for an infinite amount of health care costs such as Medicare deductibles, coinsurance, copays and more.

58% of surveyed beneficiaries believed that you are automatically enrolled in Medicare when you turn 65, even if you are not collecting Social Security benefits at that time.

And more than seven out of 10 believed that Medicare will notify you if you are not automatically enrolled.

Both are untrue, and both can lead to harmful consequences such as late enrollment penalties and lapses in coverage.

If you are not collecting Social Security (or Railroad Retirement Board) benefits at least four months before your 65th birthday, you will not be automatically enrolled in Medicare and must take the steps to manually enroll. Further, the Centers for Medicare & Medicaid Services (CMS) will make no effort to inform you that you must sign up yourself.

Those who fail to enroll in Medicare upon turning 65 and don’t have other qualifying health coverage will typically not only be left without coverage but can also be slapped with late enrollment penalties once they do finally sign up.

The late enrollment penalty for Medicare Part B is 10% of the premium for every year that you were eligible to sign up but did not. And what’s worse is that you will continue to pay that penalty every single month for as long as you remain enrolled in Part B, something that 46% of our respondents did not know.

Medicare’s late enrollment fees also extend to prescription drug coverage, where beneficiaries who experienced a lapse in “creditable drug coverage” for 63 straight days can face penalties upon signing up for a Medicare Part D plan.

While 1% may not seem like much, someone who goes one year without creditable drug coverage can suddenly face a 12% penalty on top of their monthly Part D drug plan premium. And just like the Part B penalty, the Part D late enrollment fee remains in place for as long as you maintain coverage.

Almost 43% of our respondents incorrectly believed that you will be automatically enrolled in a Medicare prescription drug plan as soon as you become eligible.

Not all doctors and other health care providers who treat Medicare patients are required to charge the same amount. Certain providers, because of their contract with Medicare, are allowed to charge a patient up to 15% more than the Medicare-approved amount. This is known as a Medicare “excess charge.”

Only 56% of our respondents were aware that doctors who treat Medicare patients may be allowed to charge more than the predetermined amount. These excess charges can be avoided simply by asking a healthcare provider in advance of treatment whether or not they “accept Medicare assignment.”

Despite an overwhelming lack of knowledge about their own Medicare benefits, our survey respondents remained largely confident in their coverage decisions.

More than three out of every four beneficiaries are confident that they are enrolled in the best Medicare coverage options for their health care needs and budget.

Despite a general lack of knowledge surrounding their benefits, our respondents mostly agreed that their Medicare benefits are worth the time and effort needed to enroll in and use the coverage.

Additional research from the Kaiser Foundation discovered that only a small percentage of beneficiaries actually take advantage of the fall Medicare Open Enrollment Period to make changes to their coverage, even though millions of beneficiaries face potential increases in plan premiums and other costs by staying in the same plan.

The COVID-19 pandemic has presented a frightening time for anyone to be unclear about their health care benefits, especially older adults. But that’s precisely what we found among our surveyed beneficiaries. 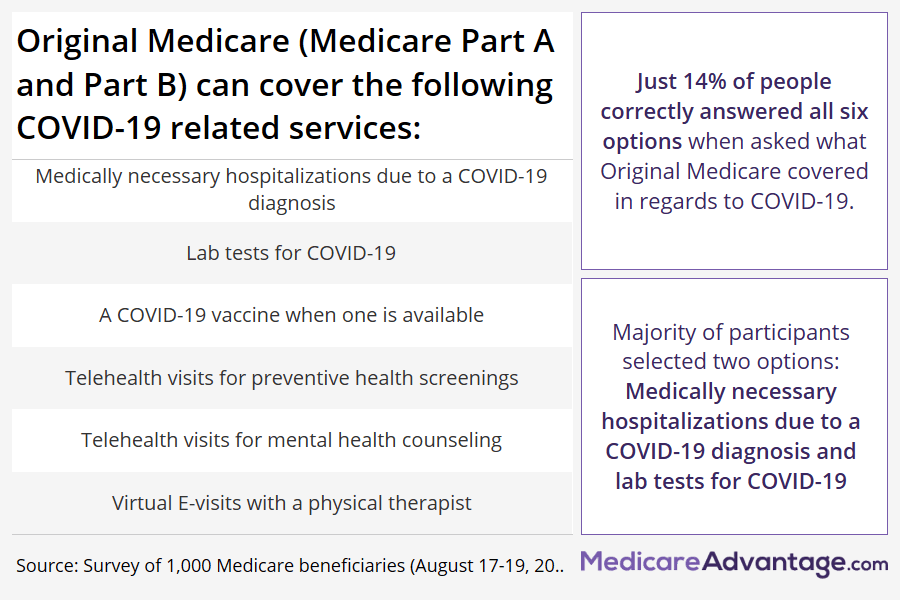 Original Medicare can provide coverage for six benefits that are either directly or indirectly related to COVID-19. But just 14% of our respondents were aware that all six benefits would be covered by Medicare.

A high percentage of Medicare beneficiaries lack critical knowledge about their Medicare insurance. We theorize that this lack of knowledge may lead to unnecessarily high out-of-pocket costs, poor health care choices and diminished overall health among our nation’s seniors.