A Guide to the Influenza Vaccine and State Health Resources

Health care providers across the United States are preparing for this year's flu virus.

The following guide provides information about what to expect from the 2019-2020 flu season, ways to keep yourself safe and a list of state-by-state resources for more localized information.

Each year’s flu is different, and the makers of flu vaccines must adapt the makeup of each season’s vaccine to keep pace. Depending on the year, the flu vaccine is typically anywhere from 40% to 60% effective.2

Traditional flu vaccines are designed to protect against three main flu viruses: Influenza A (H1N1), Influenza A (H3N2) and Influenza B. These are known as trivalent (or three-component) vaccines.

For the 2019-2020 flu season, trivalent vaccines will be targeting the following viruses:

Quadrivalent (four-component) vaccines include all of the above viruses along with Influenza B/Phuket/3073/2013 (Yamagata lineage) for added protection against Influenza B.

The six most common vaccine options available for the 2019-2020 flu season include:

There is also a flu vaccination that is available by a jet injector that has been approved by the U.S. Food & Drug Administration (FDA) for people ages 18 to 64.

Instead of using a needle, a jet injector inserts the vaccine into the body using a high-pressure stream of fluid that penetrates the skin. Like the nasal spray, the jet injector is an option for those with a fear of needles that may prevent them from otherwise getting the vaccine.

The Centers for Disease Control (CDC) recommends the flu shot for everyone ages 6 months and older.

If you have Guillain-Barre Syndrome or have previously had a life-threatening allergic reaction to the flu vaccine or to eggs or gelatin, notify your doctor prior to getting the vaccine.

Typically speaking, the earlier in the flu season you get the vaccination, the more effective it is.

There are a projected 162 million to 169 million doses of injectable flu vaccinations being prepared for the U.S. market for this year’s flu season.

You may use the HealthMap Vaccine Finder to locate where in your area you can get a flu vaccine.

Seniors and the Flu Vaccine

Older adults are at higher risks of developing complications from the flu virus. According to the CDC, adults over the age of 65 account for 70 to 85 percent of seasonal flu-related deaths in the United States.7

It is important for seniors with weakened immune systems to get vaccinated in order to reduce the risk of developing serious medical problems from acquiring the flu.

For health adults over 65, the CDC recommends administration of the high dose flu vaccine (Fluzone).

Medicare Part B covers one flu vaccination each year. As long as the health care provider administering the vaccination accepts Medicare assignment, you will pay nothing for it.

For those already affected by the flu, there are four medications (Rapivab, Tamiflu, Xofluza and Relenza) that are available by prescription only.

While over-the-counter flu medicines can work against flu symptoms, these three drugs are proven to more effectively shorten the severity and duration of flu symptoms.

The CDC reports that all three drugs have been shown effective against this year’s anticipated flu strains. However, the drugs are only effective if taken within two days of contacting the flu virus.

These drugs are not covered by Original Medicare but may be covered by a Medicare Advantage plan with prescription drug coverage (MA-PD) or a Medicare Part D plan.

Other Ways to Avoid the Flu

The flu is an airborne virus that can be passed in droplets of breath, but it is most commonly transmitted by the hands. In addition to getting vaccinated, you should:

The Flu vs. a Cold

The cold and the flu are both respiratory illnesses that share some common symptoms and tend to surface during the same part of the year. So it’s natural for many people to mistake one for the other.

Because the flu can lead to severe complications, passing off the flu as “just a cold” can carry some dangerous consequences. It’s therefore important to be able to recognize the difference between the two illnesses.

A cold is much milder than the flu and generally does not result in more serious health problems like pneumonia or hospitalization. Someone with a cold is more likely to have a runny or stuffed up nose, sore throat and sneezing.

The symptoms in a cold are typically much milder than those of the flu and tend to emerge more slowly.

People with the flu are more likely to have a fever, the chills, muscle and body aches, headaches and fatigue. Flu symptoms tend to emerge more quickly.

You may be familiar with the seasonal flu, but did you know that there is a type of flu virus that can be far more dangerous and can threaten people all over the world?

Pandemic flu is the name given to an event where a new strand of the flu virus spreads quickly from person-to-person with little chance of immunity.

If a flu virus mutates and becomes a new strand of flew that people have not yet encountered, those infected will likely have no immunity to the new form of the virus, which can lead to dire consequences with swift and far-reaching consequences.

Pandemic flus occur rarely, but they have the potential to kill millions of people. The most recent case of pandemic influenza was the H1N1 pandemic virus that spread across the U.S. and the world in 2009.

What to Do With the Flu

The worst of the flu symptoms generally dissIpate within four days, and full recovery can be expected in 7-10 days.

In addition to seeking out the aforementioned medications, those with the flu should stay home from work or school and avoid being around others. Bed rest, drinking an increased amount of fluids and a light diet are also recommended.

Who is Most at Risk

While everyone is at risk for the flu, those who are at an increased risk include pregnant women, adults over 65, children younger than 5 and anyone with long-term health conditions like asthma, diabetes or cancer.

There are three situations in which the virus becomes especially deadly: 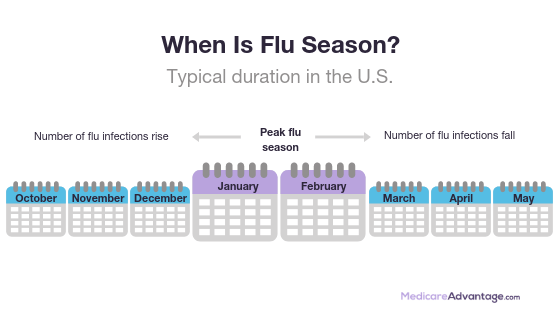 The Flu and Pneumonia

Among the most serious complications of the flu is pneumonia, which is a deadly infection of the lungs. Pneumonia happens when the flu virus enters your lungs, or when you develop a bacterial infection during the course of having the flu.

Symptoms of pneumonia include a cough with green or bloody mucus, increased pulse, a bluish tint on lips and nails, shortness of breath and painful breathing. Antibiotics are effective against bacterial pneumonia but not against viral pneumonia.

There are two types of vaccines available for pneumonia, one for adults and one for children.

The CDC recommends the pneumonia vaccine for children under two, healthy adults over the age of 65 and adults under 65 with certain medical conditions.

Stay Up to Date

The CDC has a number of resources available to help you stay updated about the 2019-2020 flu season.

Centers for Disease Control and Prevention