A Study of How Political Bias Affects Physical and Mental Health

How do Americans answer questions about their mental and physical health – as well as their overall outlook – when President Donald Trump’s name is included in the question versus when it is not?

We surveyed a nationally representative sample of approximately 2,000 Americans and asked about everything from weight gain and sleeping habits to their anxiety about foreign policy and the environment.

Half of our participants were asked questions about their health and outlook “since 2016,” and the other half were asked about the same factors “since Trump was elected.”

The result? Including the name “Trump” created a notable change in responses, exposing a potential for inherent tribalism and confirmation bias around what we call the “Trump trigger effect.” 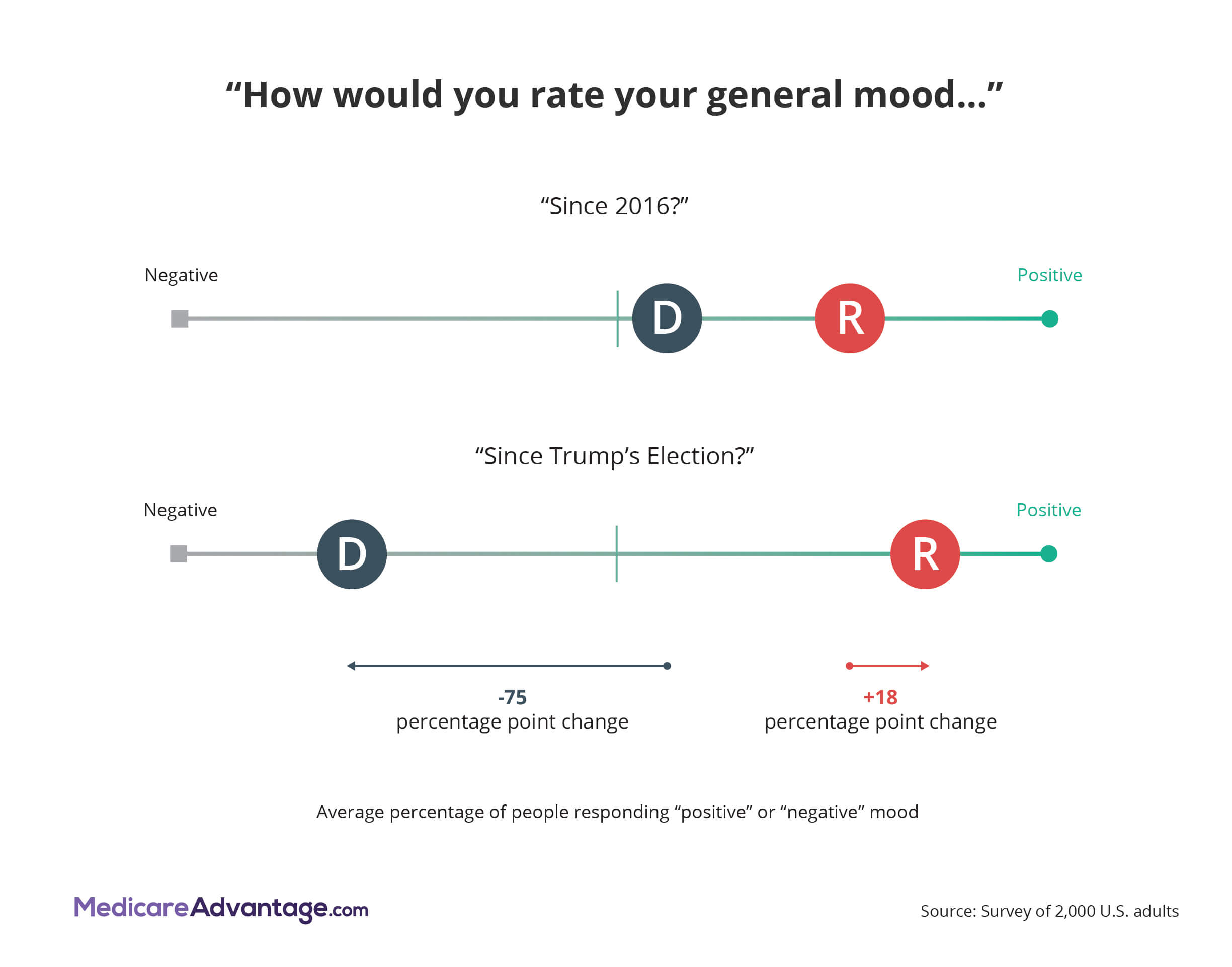 Meanwhile, 51% of Republicans reported an overall positive mood since 2016. That number increased to 57% when Trump’s name was mentioned.

Lynell Ross, a Certified Health and Wellness Coach, Behavior Change Specialist and the founder of the life-advice website Zivadream, says our own human DNA may partly be at play.

“Humans are hard-wired with a negativity bias, which means two out of every three thoughts are negative or fearful,” said Ross. “A lot of this kind of thinking runs in the background of our day, causing us to feel nervous or irritable without being fully conscious of why we feel that way.”

Republicans are more likely to report being in better physical shape when asked about their health since Trump’s election as opposed to since 2016. 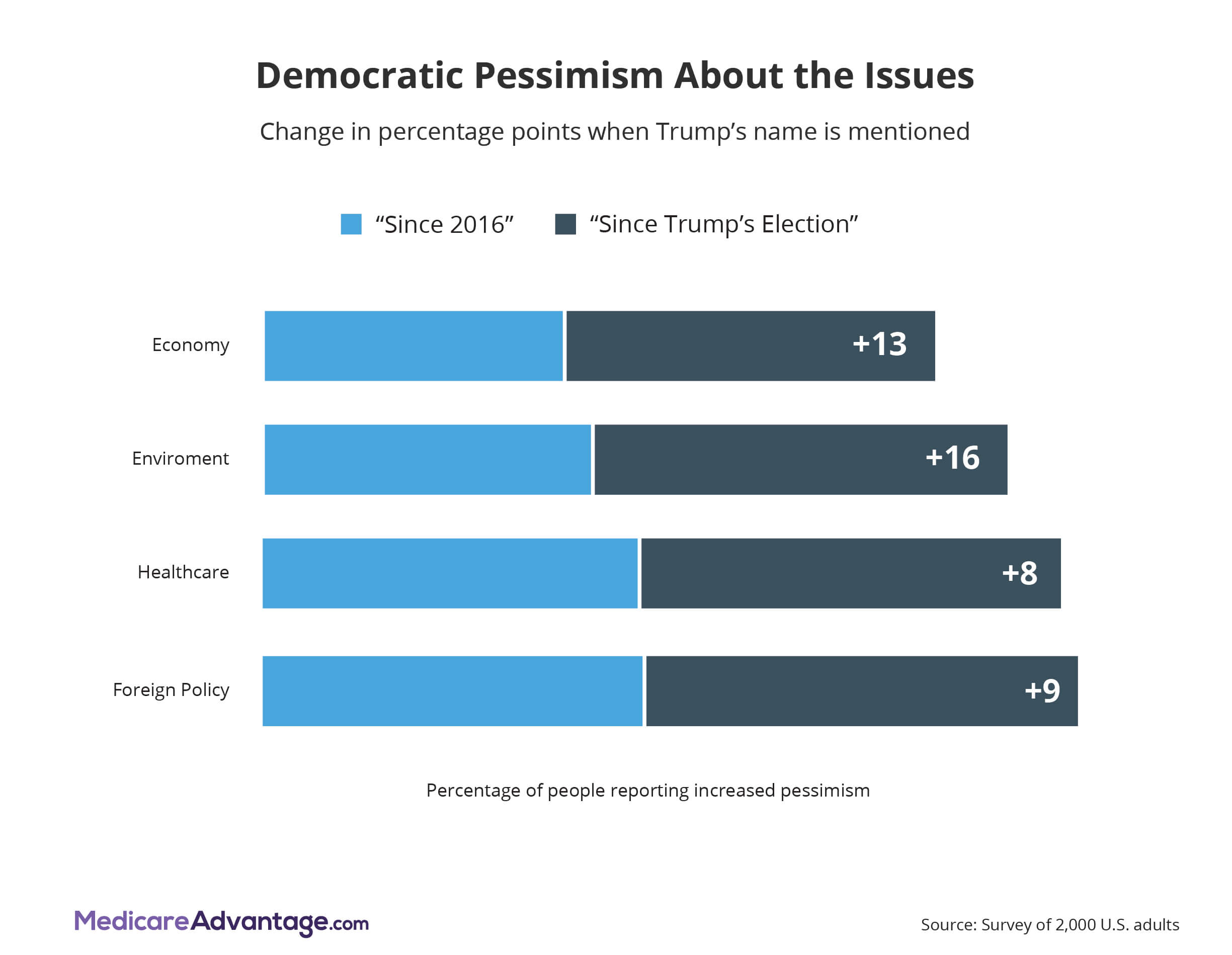 Democrats report higher anxiety about the economy, the environment, health care and foreign policy since Trump’s election as opposed to since 2016. Republicans conversely report a more optimistic outlook.

The word “Trump” proved to not only influence the way our survey respondents viewed their physical health, but also their mental health and their anxiety about the world around them.

Democrats reported higher anxiety and increased pessimism when asked about various issues since 2016 versus since Trump’s election.

Meanwhile, Republicans displayed a nearly identical amount of change in their optimism and positive outlook related to the same issues when Trump’s name was included in the question.

“When we think we are going to be hurt in our wallets, our healthcare and our environment, we feel threatened, and our brains go into fight or flight mode.” - Lynell Ross, Certified Health and Wellness Coach and Behavior Change Specialist

Talking politics with friends and family who reside on the other side of the aisle is never easy. But our data indicates that it’s even tougher for those who disapprove of Trump.

Nearly three-quarters of those who disapprove of Trump (72%) reported feeling some anxiety about talking politics with friends or family when they know it’s likely to spark a disagreement.

But for those who approve of Trump, only 53% reported feeling that same anxiety.

“The genetic programming of our species is designed to seek out pleasurable experiences and to avoid situations that would cause stress or pain.” - Jodi De Luca, PhD., Licensed Clinical Psychologist

The above notion was supported by additional data centered around 2020 election anxiety. 45% of Democrats reported feeling negative anxiety about the November 2020 presidential election, compared to only 16% of Republicans.

Meanwhile, 55% of Republicans said they were positively excited for the election, while only 34% of Democrats said the same.

“Election anxiety is very real,” said Dr. Steven Rosenberg, a Psychotherapist and Behavioral Specialist in Philadelphia. “Anxiety can cause a variety of extremes in behavior from overeating, excessive smoking or drinking, sleep disturbances and more.”

Self-reporting about lifestyle habits changed when Trump’s name was mentioned.

Self-reporting about health and lifestyle habits was also affected by whether or not the name “Trump” was used in the question.

31% of Republicans reported to be sleeping 1-3 fewer hours per night since 2016, but only 9% claimed the same amount of sleep loss since Trump’s election.

“Without proper sleep, the all-important immune system suffers and does not respond as effectively to infections. Diabetes has been linked to sleep quality, for the body’s response to insulin is affected by insufficient sleep. Sufficient sleep is necessary for proper brain function; deficient sleep contributes to poor decision-making, emotional dysregulation, inattentiveness, problem-solving difficulties, and lack of focus.” - Dr. Carla Marie Manly, Clinical Psychologist and author of Joy From Fear: Create the Life of Your Dreams by Making Fear Your Friend

40% of Republicans reported eating comfort food to alleviate anxiety either daily or weekly since 2016, but just 25% admitted to the same since Trump was elected.

Republicans and Democrats did have one thing in common, however, when it comes to comfort eating: the majority of respondents from both sides of the aisle answered that their preferred comfort food in times of high anxiety are chips and other salty snacks.

Only 9% of Republicans reported that they started seeing a therapist since Trump was elected, but 17% claimed to have started therapy since 2016.

The Trump name seemed to have an effect on reported anxiety levels for both Republicans and Democrats alike.

Similarly, 25% of Republicans reported starting the use of an antidepressant since 2016, but only 12% reported doing so since Trump was elected.

Jodi De Luca, a Licensed Clinical Psychologist in Colorado, spoke about the correlation between stress and the sense of control as it relates to politics.

“Knowing that we have some sense of control in life is critical in our overall well-being, and essential in the management of stress,” De Luca said. “Our control over the current political climate is seemingly limited, and in many ways this lack of control inhibits our ability to manage politically related stress.”

32% of Democrats reported having more energy since 2016, but only 13% reported a higher energy level since Trump’s election.

“In today's political climate we spend all day on high alert, burning out our adrenal glands, and hurting our mental well-being. Our stress hormones take over, and we do things like overeat for comfort, drink alcohol to excess, numb out on social media, feel helpless, and drained of energy that often keeps us from exercising.” - Lynell Ross, Certified Health and Wellness Coach and Behavior Change Specialist

Our study doesn’t reach any conclusions about the direct cause of how and why people’s health habits, physical health and mental health have improved or declined since 2016.

We can, however, conclude that when our survey respondents assessed their personal health, the name “Trump” tended to cause a wider range of variance in their answers and an increased tendency toward the extremes, either positive or negative.

When viewed through this lens, it seems apparent that some of the perceived positive and negative effects of Trump’s 2016 election on American health may be just that: perceived. The results depend on who – and how – you ask.

Participants were filtered to exclude heavy users of the Mechanical Turk platform, as well as based on completion time and failure to follow written instructions within the survey.

While we tried to remain as scientific as possible in our methodology, any study of health remains highly subjective. These results show an association but do not prove causality.