You should call your parents and grandparents.

That’s the consensus from a new survey of 479 Americans age 55 and up, which was conducted to find out how older adults feel about the level of communication they receive from their grown children and grandchildren.

Some new technologies and the novel coronavirus (COVID-19) outbreak are actually spurring an increase in family communication, but adults age 55 and up still largely wish that their kids and grandkids would call, text or video chat more often.

Most older adults want to hear from their family more often

Nearly 6 in 10 adults over 55 report wishing they would hear from their grandchildren more often, and more than 4 in 10 said the same about their adult children. This spaced out family dynamic makes the telephone and other modern technologies all the more vital as a lifeline between kin.

And when it comes to parents and their adult children, that lifeline is busy:

When grandchildren are in the mix, adult children in the middle are often squeezed out of the conversation.

In terms of the quality of communication, roughly 1 in 4 older adults say they wish their conversations with their adult children were deeper and richer.

2% of older adults report their adult children share too much information.

Just over 1 in 4 grandparents say they wish for richer and deeper conversations with their grandkids, with 2% reporting that their grandchildren overshare in conversation.

Communication technology has advanced rapidly. Gone are the days of hand-written letters. Even traditional phone calls are the most frequently used form of communication for only 15% of grandparents and their grandchildren.

Rounding out the most frequent forms of communication between adult children and their parents was phone calls (27%), in-person visits (16%), social media (9%), video chats (6%) and email (4%).

One interesting subtlety emerged when asked about their preferred form of communicating with their adult children: 26% of older adults most prefer to speak to their children by phone, but only 13% prefer using video chat.

Among their least favorite forms of communication, 34% say they most dislike using social media as a form of communication with their kids, and 31% report the same dislike of using email.

The isolation and social distancing measures people across the U.S. are taking during the COVID-19 outbreak are impacting every aspect of daily life.

But one positive that has come out of it is that nearly half of grandparents report communicating with their adult children or grandchildren more often than before the outbreak. 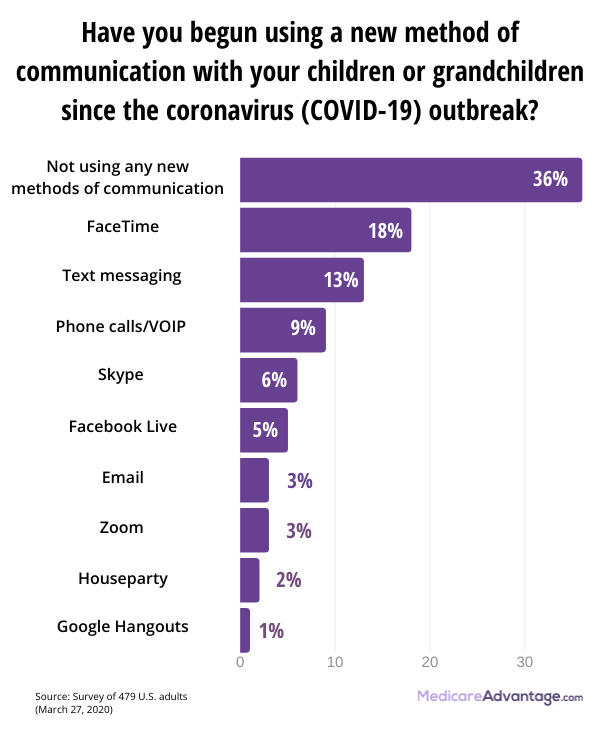 And not only are they communicating more often, but they’re using new technologies to do it.

Many of America’s older adults live far away from their adult children and grandchildren, and many wish they communicated more often with their younger family members.

Grandparents are adopting new technology as a means to communicate with their adult children and grandchildren, due to improvements in communication technology, and also due recently to the social distancing measures in place as a result of the COVID-19 outbreak.