Survey: Florida Voters Say Both Trump and Biden are “Too Old” to Serve as President

No matter who wins, we will inaugurate the oldest-ever president in January. And that’s problematic for Florida voters.

How old is too old for a candidate to hold political office?

We polled over 400 Florida residents of all ages and political affiliations about whether or not presidents and members of Congress can be considered too old to serve.

Of our survey respondents, 86% think a president can be too old to serve.

We asked our respondents how old was “too old” to serve effectively as president. Democratic and Republican voters agree that, on average, 76 is too old to serve as president.

Democratic candidate Joe Biden is already older than 76, and President Donald Trump would reach that mark halfway through a second term.

Here are some of the other notable findings about Florida voter attitudes. 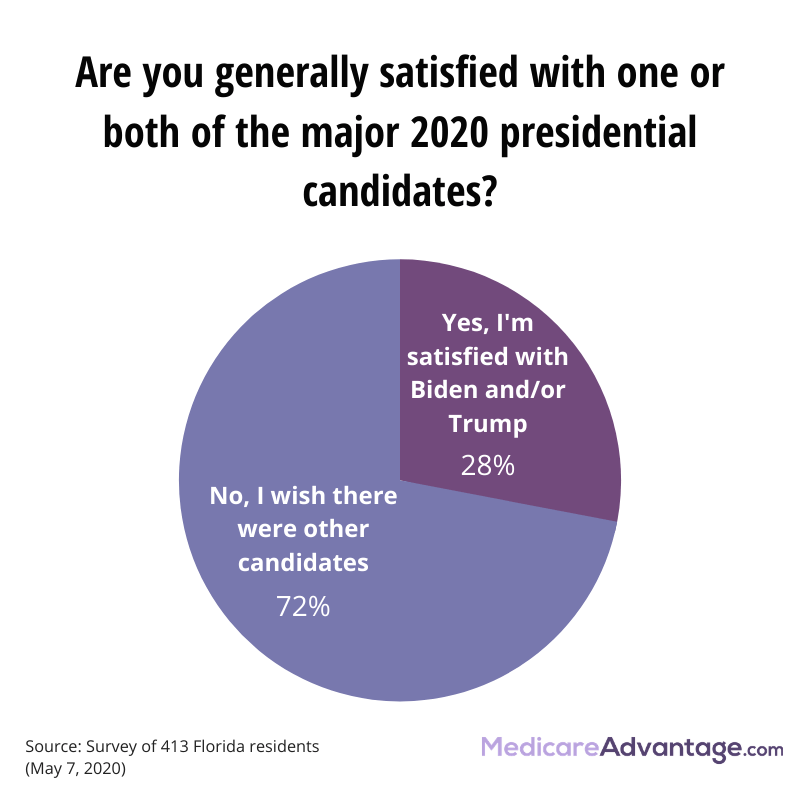 No matter who wins the presidency in 2020, the U.S. will see the oldest president to ever take the oath of office come January. Trump turns 74 on June 14, and Biden will turn 78 shortly after the November election.

We’re also facing the oldest combined age of presidential candidates in our nation’s history. Trump and Biden will be a combined 151 years old on election day, which far surpasses Trump and Hillary Clinton (a combined 139 years old in 2016) as the oldest duo ever to run for president.

And that’s where things get problematic for Florida voters.

Few Floridians are satisfied with one or both presidential candidates, except for older voters and Republicans

Only 18% of Florida Democrats and 16% of independent voters are generally satisfied with one or both candidates, while 64% of Republicans are satisfied with at least one candidate.

Democrats are more evenly split, with 51% saying Biden’s age could negatively impact his performance, and 55% saying the same about Trump.

If a candidate under the age of 40 were to appear on the ballot, Democratic and independent voters in Florida are more likely to vote for them than the Republicans we surveyed. 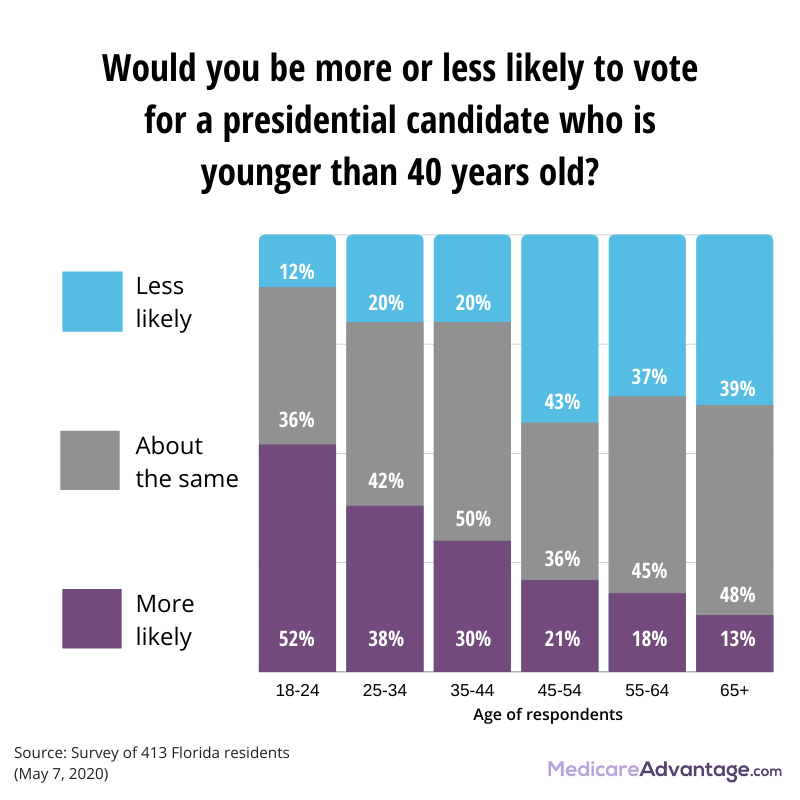 A younger presidential candidate would be more likely to win over younger voters.

In fact, our data shows that the correlation between the age of a candidate and the age of a voter is fairly linear: The younger the respondent, the more likely they are to support a candidate under age 40.

When discussing the two oldest candidates ever to run for president, it’s hard to ignore the topic of mental health and competency, for which much has been made throughout Trump’s presidency.

89% of respondents either strongly agree (67%) or somewhat agree (22%) that any presidential candidate should be required to pass a mental health or competency test prior to securing their party’s nomination. There is currently no such measure in place.

Among respondents between the ages of 55 and 64, 20% say that a mental health or competency screening should be applied only to older presidential candidates, and 18% of those ages 65 and up agree.

The discussion of a president’s age can be extended to include senators and other members of Congress. In the 116th Congress, the average age of the House of Representatives is 57.6, and the average age of Senate members is 62.9.

The Florida voters we surveyed have similar ideas about age in Congress as they do about the age of presidential candidates.

Term limits for members of Congress have strong bipartisan support

There is currently no limit on the number of terms that a member of Congress can serve, but 83% of Florida voters we surveyed believe there should be.

And that attitude has bipartisan support. 79% of Democrats, 84% of Republicans and 88% of unaffiliated respondents we surveyed support congressional term limits.

We presented our respondents with the following statement: “The youngest members of Congress are not likely to be effective as Speaker of the House or Senate Majority Leader because of their age.”

This notable disparity could be due in part to the fact that some of the youngest members of the House include several popular Democratic representatives. 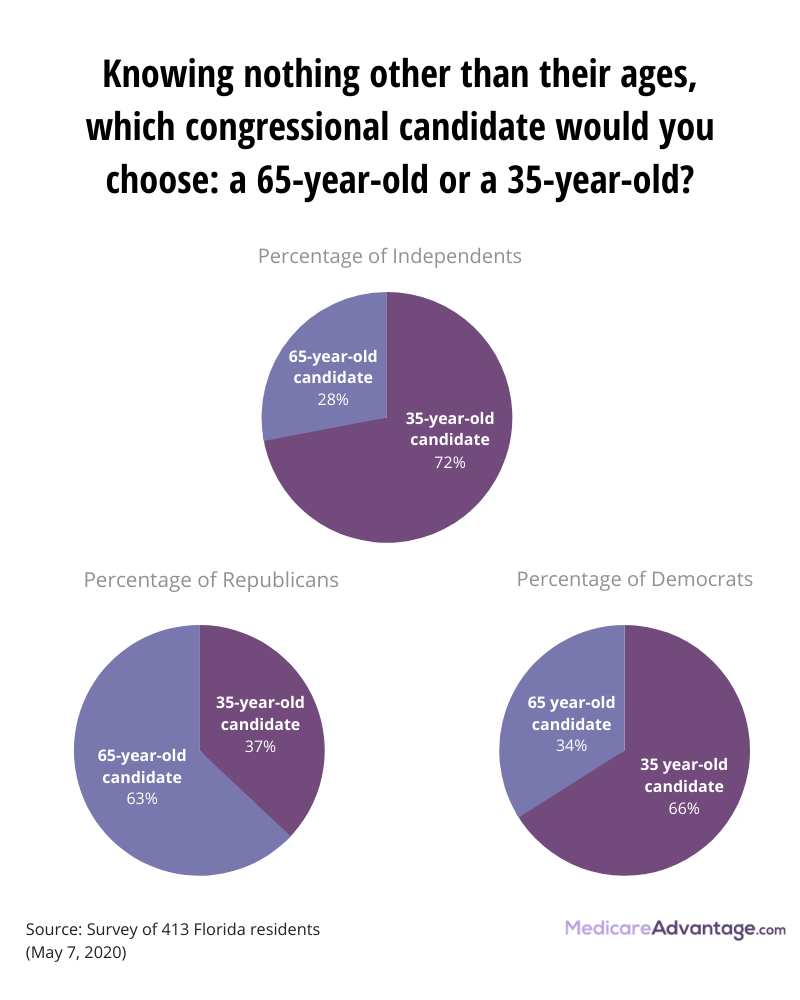 When given the blind choice of two congressional candidates, knowing nothing other than one candidate is 65 years old and the other is 35, 66% of Democrats and 72% of unaffiliated voters in Florida pick the 35-year-old, while 63% of Florida Republicans surveyed choose the 65 year-old candidate.

Respondents over age 65 are the least likely age group to think that being 60 or older makes it more difficult to serve in congress, at 14%. Florida voters age 25-34 are the most likely to agree, at 31%.

Voters under age 65 in Florida are slightly more inclined to say that a man’s advanced age negatively impacts his ability to effectively in congress than to say the same about a congresswoman.

This survey was conducted May 6-7, 2020, using an audience pool gathered using Prolific, a polling tool. The total survey side included 413 respondents.