At least once a year, you might make an effort to clean out your food pantry, go through your closet, and have your tires rotated or oil changed.

But what about visiting a doctor? You're probably more likely to put off going in for a routine physical exam than penciling one in. In fact, more and more people are avoiding their doctors – sometimes even when something is seriously wrong.

In the time of the COVID-19 outbreak, the issue is getting even worse. Over 80% of Americans think it's risky to visit medical facilities due to potential exposure to the novel coronavirus.

One study found an estimated 38% decrease in the number of heart catheterizations during the time of the outbreak, suggesting the possibility that many people with heart conditions may be avoiding important cardiac care they typically would have sought out before the pandemic.

Who else is shrugging off their annual checkups, and what's got them feeling so blasé about their health? To find out, we surveyed over 1,000 people about the frequency with which they visit their primary care physicians and specialists and their reasons for avoiding doctor visits entirely. Keep reading to see what we learned.

In Doctors We Trust

No matter how much you might want to shrug off a runny nose or a sore throat, being sick isn't something you can usually avoid. On average, most people felt their physical or mental health kept them from performing their usual activities three days out of the month. 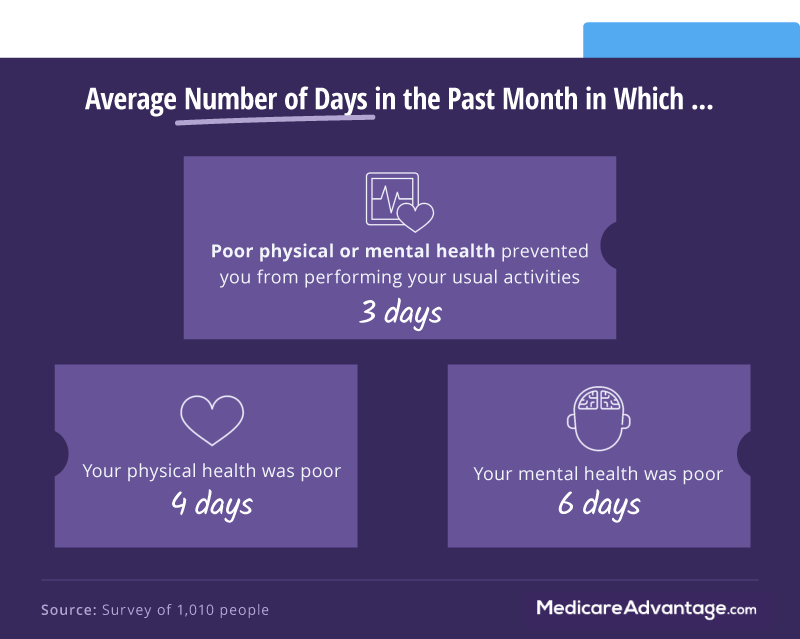 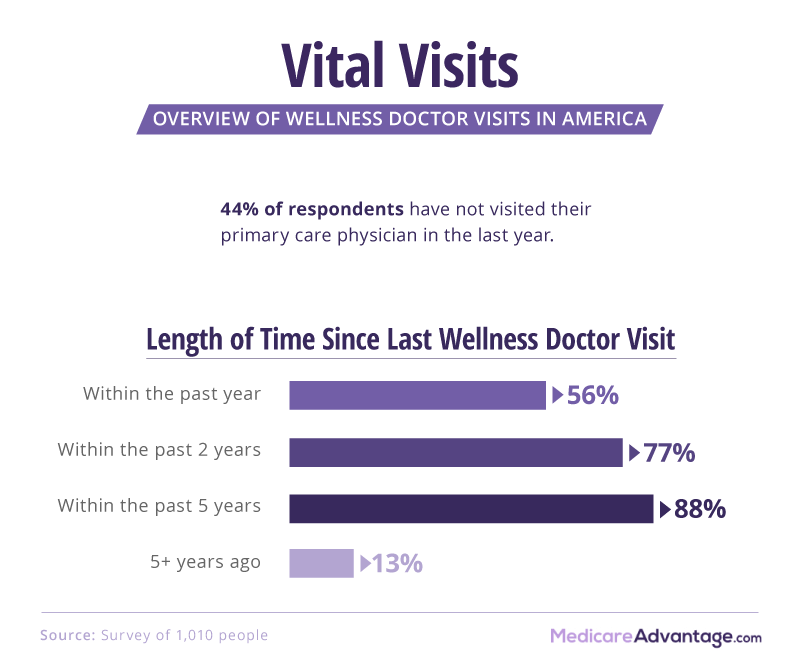 Everybody is different. The way we get sick is different, and the way our bodies fight off illnesses and infections changes from person to person. These reasons are why seeing a primary care physician regularly is important for everybody's health. In addition to prevention and condition management, almost no other care provider will be as familiar with you as your primary care doctor.

According to our survey, more than half of people (56 percent) visited a doctor for a routine checkup within the last year, and 77 percent did the same within the last two years. Only 13 percent of people went five or more years since seeing a primary care physician. Beyond standard screenings and exams, regular checkups are important for understanding how your lifestyle impacts your physical and mental health.

More than half of respondents may see their primary care physician on an annual basis, but that percentage may not represent every demographic equally. 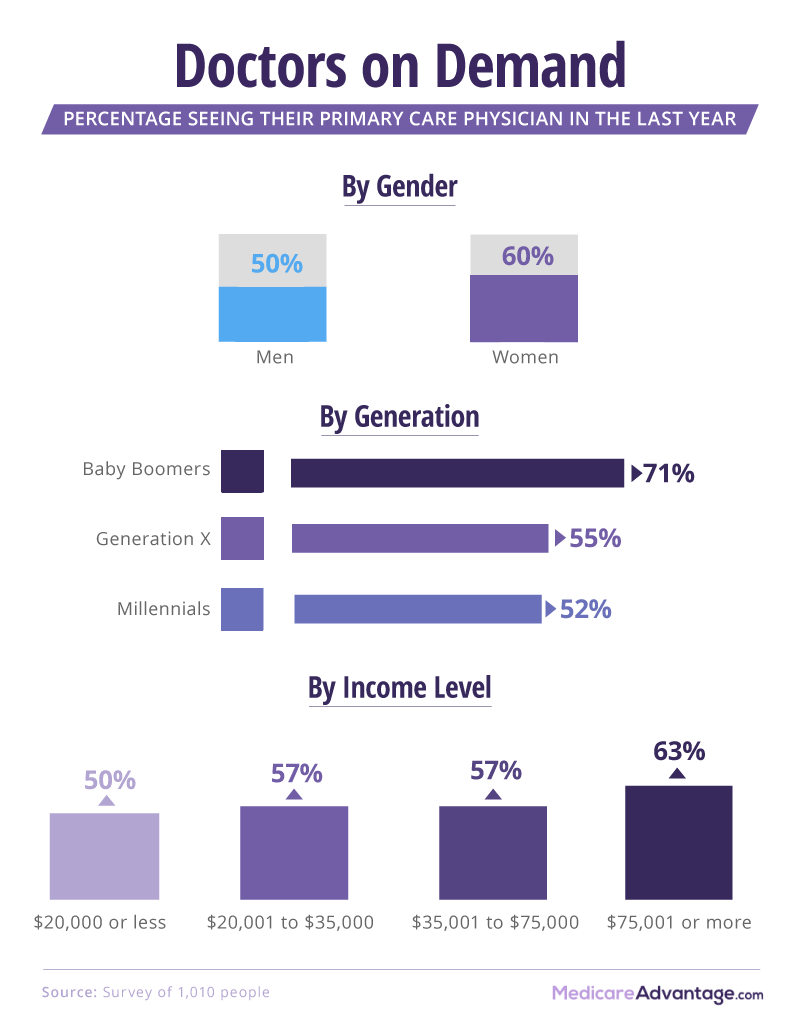 Women (60 percent) were more likely than men (50 percent) to see their primary care physician in the last year; however, older generations were more inclined to go to the doctor than younger people. Just 55 percent of Gen Xers and 52 percent of millennials, compared to 71 percent of baby boomers, had a wellness doctor's visit within the last year. Young people, in particular, tend to avoid the doctor because they're focused on work or find it too costly to prioritize their health.

Money might not be a concern exclusive to millennials, though. While 63 percent of people earning over $75,000 a year visited their primary care physician within the last year, only 50 percent of people earning $20,000 or less said the same. Even having health insurance may not be enough to make health care affordable. More than 84 percent of respondents had some coverage, but 27 percent still avoided general care visits due to the costs.

Our biggest health concerns can sometimes be an ongoing headache or a persistent cough, but in other cases, they can be much more severe. Despite this, the biggest excuse most people gave for not seeing their doctor was related to the cost. Even with insurance, high deductibles can act as a barrier to adequate care. Across the U.S., more than half of people with a health care plan through their employer have an annual deductible of over $1,000. 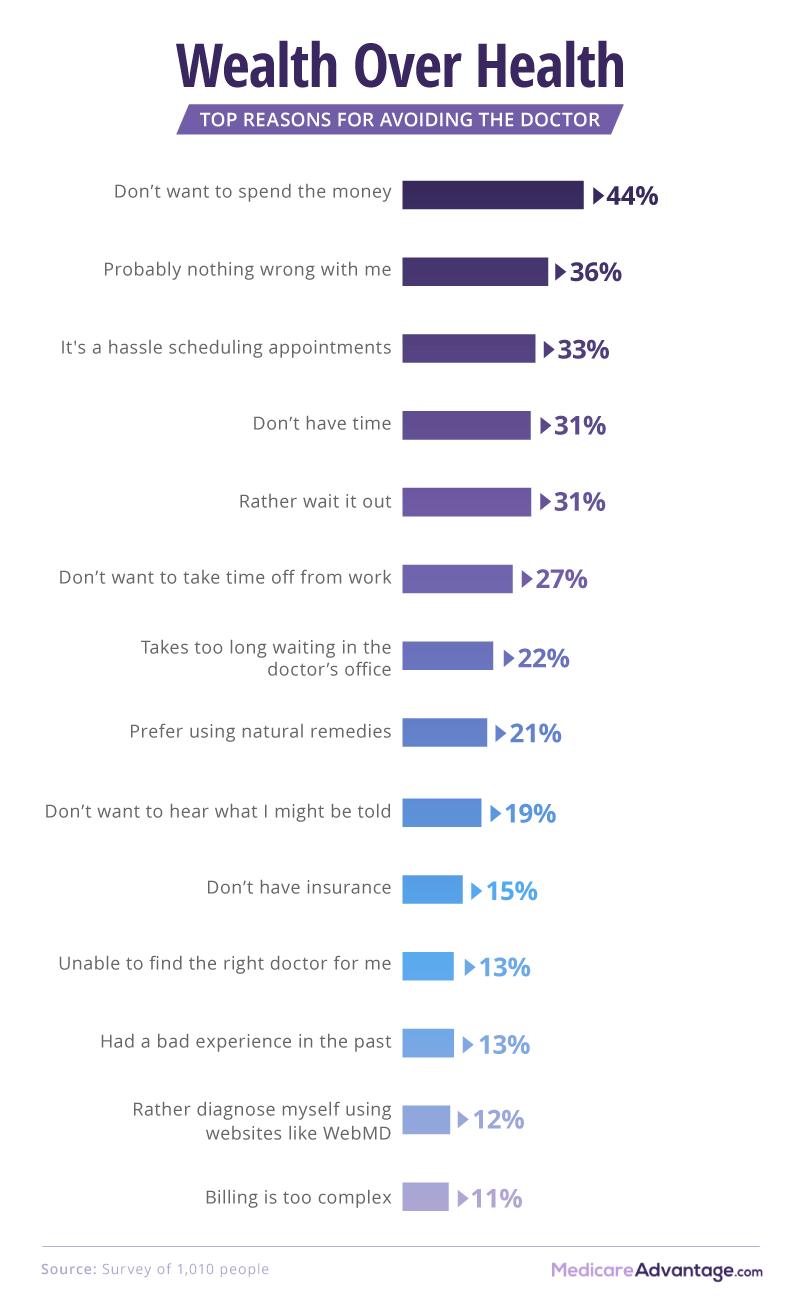 Forty-four percent of people didn't want to spend the money to see their primary care physician or a specialist. Beyond the price of a visit, it was thinking there was nothing seriously wrong (36 percent), the hassle of trying to schedule an appointment (33 percent), and just not having enough time (31 percent) that topped the list of reasons for dodging the doctor.

The struggle of booking an appointment may sound trivial, but it's become such a pressing issue (particularly among younger patients) that many providers now offer online scheduling to help people avoid missing out on visits.

Dodging the Doctor, by Demographic

The cost might be one reason for postponing a doctor's visit, but it isn't the only concern some people have when it comes to making an appointment.

Among both millennials and Gen Xers, the cost was the top concern associated with circumventing a checkup. For baby boomers, a belief that there was probably nothing wrong prevailed over a financial justification. While more than 1 in 3 millennials admitted they didn't have time to see their physician, nearly as many Gen Xers said the hassle of making an appointment was too much.

Time and money were typically the biggest reasons people decided not to see a doctor. In fact, anywhere from 27 to 33 percent of people said they'd rather wait it out than see a physician. Depending on the ailment, that mindset could make conditions even worse, however. Sixteen percent of those surveyed admitted their general health quality was poor, and 32 percent had been diagnosed with a chronic health condition or disease.

A primary care physician isn't the only doctor you're supposed to make time for regularly. According to the Centers for Disease Control and Prevention (CDC), adults should see a dentist at least twice a year and an optometrist once every two to three years. Scheduling appointments to the chiropractor or a psychologist vary on a case-by-case basis. 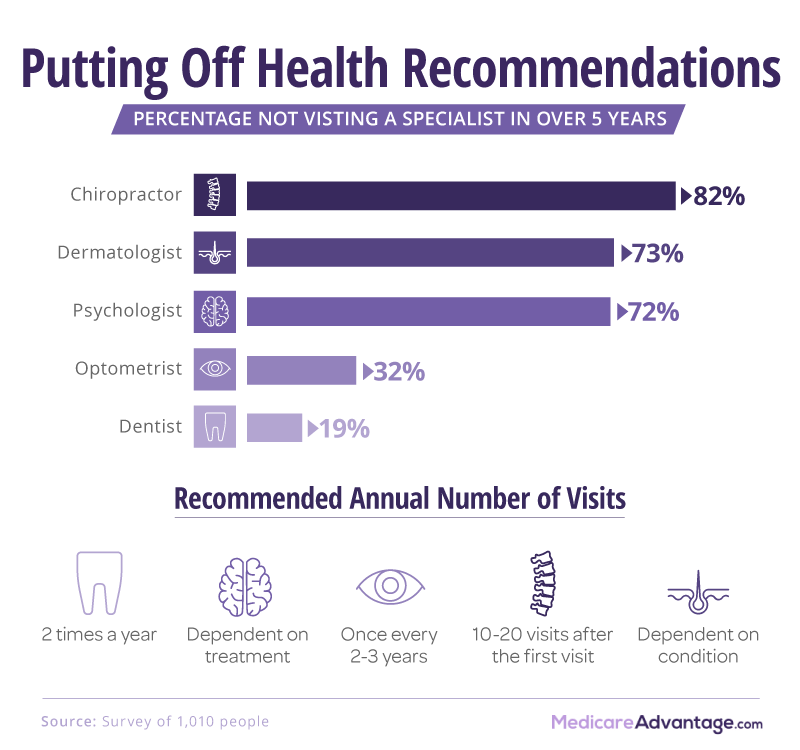 More than 4 in 5 people hadn't seen a chiropractor in over five years. Health experts suggest that regularly seeing a chiropractor can help reduce headaches and other chronic conditions, including fibromyalgia and osteoarthritis.

Like the chiropractor, 73 percent of people hadn't seen a dermatologist in over five years, while 72 percent said the same about seeing a psychologist. It can often be the stigma of treatment that prevents people from caring for their emotional health the same way they do their physical wellness.

As well, nearly 1 in 5 people went over five years since their last dentist appointment. Cavities and gum disease are preventable, but not if a dentist doesn't catch them in time.

Keeping the Doctor Away

Across all specializations, men and women most avoided their chiropractor. Even though you've likely heard of chiropractors helping athletes, some people still wonder whether chiropractic treatments are a legitimate form of care. However, chiropractic adjustments on the back and neck are largely considered beneficial. 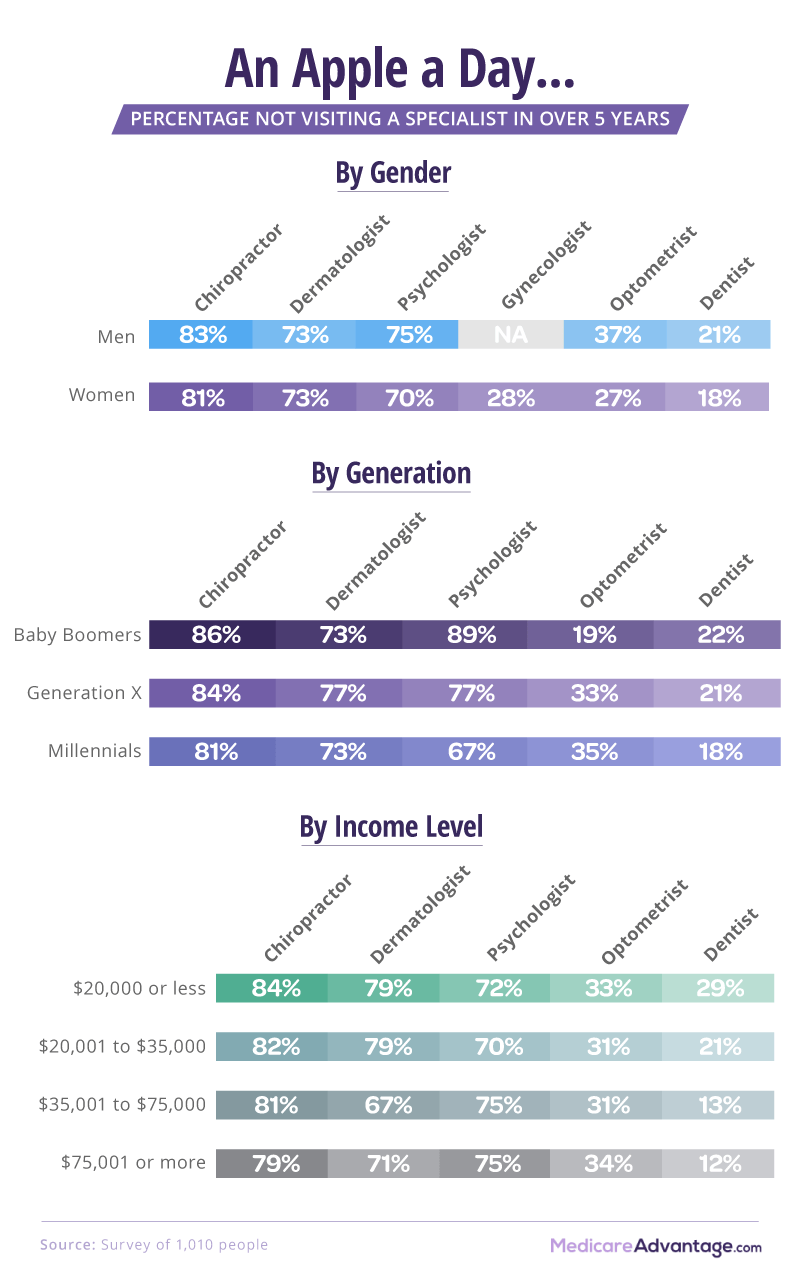 There are always going to be reasons for not seeing a doctor. Finding one you trust can be stressful, figuring out how to make an appointment can be aggravating, and sometimes the cost of copays and premiums can be hard to handle. Despite these hurdles, however, seeing a primary care physician regularly can make a huge difference in people's health and wellness.

Even if the doctor says you're perfectly healthy, isn't the peace of mind worth the proverbial hoops you might have had to jump through to get there? We're guessing the answer is "yes."

For this study, we pulled the standard health recommendations and the recommended annual number of visits to optometrists and dentists from the Centers for Disease Control and Prevention (CDC). The main limitation of this project is that various reputable sources cannot agree on recommendations when it comes to psychological visits and mental health or chiropractic visits and physical health. Likewise, sources were unable to find enough evidence to recommend for or against routine skin screenings through a certified dermatologist. Instead, they advise people to be proactive by self-examining your body for irregular spots and determine visits based on personal conditions or family history.

We conducted an online survey of 1,010 people via Amazon's Mechanical Turk. Attention-check questions were placed throughout the survey and respondents were disqualified if they were not paying attention and answered incorrectly. Respondents who entered inconsistent data were also excluded from the final results. Forty-seven percent of respondents identified as male and 53 percent as female. The average age of respondents was 34 years old, with 18 being the age of the youngest participants and 77 being the age of the oldest.

Ready for a checkup? We don't blame you. Feel free to pass along the results of our survey with your audience as long as you link back to this landing page giving the author's and contributors full recognition for their findings.