Fad diets are hardly a new phenomenon, but our digital culture enables them to thrive like never before. Trendy diets can attract cult-like followings overnight thanks in part to bloggers and social media influencers but are often swiftly displaced by fresher fads later. It's not all hype, however: Beneath the buzz, some of these trends seem to produce powerful stories of weight loss and healthy living. Which diets might actually be worth attempting, and which should we regard cynically instead?

We asked more than 1,000 individuals currently following a diet plan to describe their inspiration for attempting a new way of eating and their experiences along the way. Our survey results reveal which fad diets are most popular and which might resonate with specific personal health goals. Moreover, we tracked how many followers of each diet have actually attained healthy weights. To see which fad diets might be having a lasting impact, keep reading. 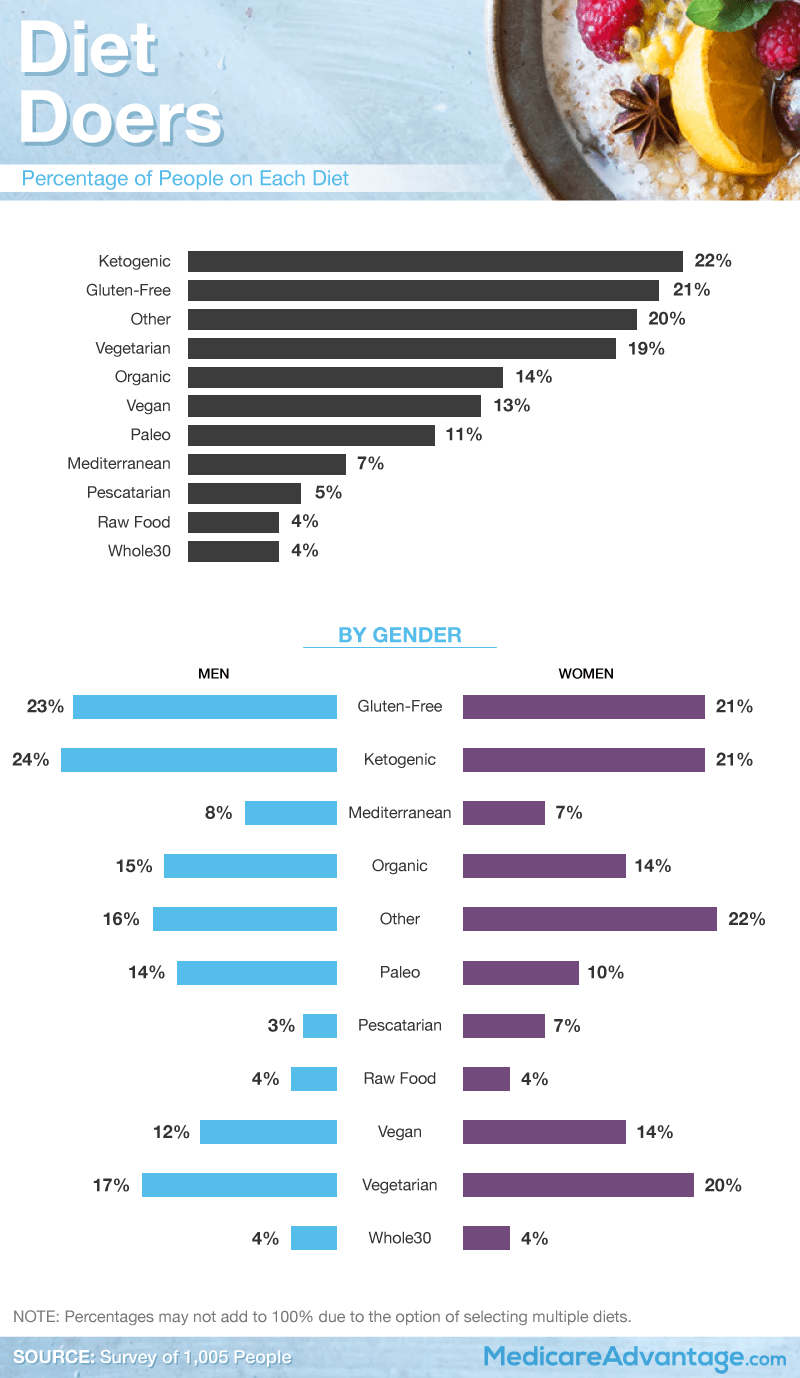 Among the dieters surveyed, 22% adhered to the ketogenic diet, making it the most popular option of all thanks perhaps to a plethora of celebrity endorsements for the low-carb, high-fat approach. The gluten-free lifestyle ranked second in terms of practicing dieters despite lingering controversy about its true health benefits. Though some insist the evils of gluten have been vastly overblown, others say rising rates of associated illnesses, such as celiac disease, justify the public interest in the diet.

The vegetarian approach ranked fourth overall, followed by the organic and vegan diets. Experts have noted the soaring popularity of organic goods among American shoppers, a market worth more than $40 billion annually. Entrepreneurs are salivating over the prospect of a similar surge in interest in vegan goods nationwide. Men and women practiced these diets (and virtually all others) at roughly equal rates, suggesting interest in purposeful eating transcends any single gender. 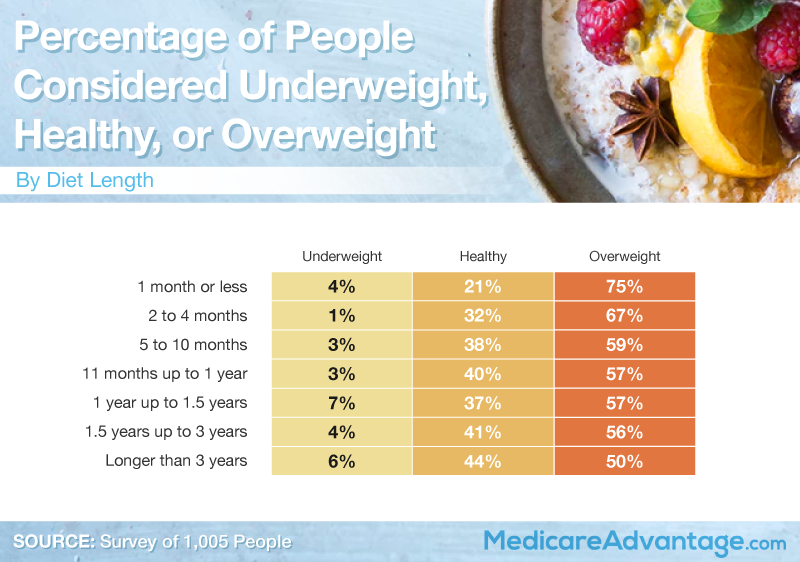 Our results suggest that persistence does pay off in terms of sticking with one's diet of choice—at least to some extent. Among those who had dieted for just one month, a mere 21% qualified as healthy on the BMI scale. But that rate jumped significantly among dieters who held out even slightly longer: 32% of those who dieted for two to four months were in the healthy weight range, as were 38% of dieters who stuck with it for five to 10 months. It's worth noting that some diets, such as the ketogenic approach, are not designed to be maintained for extended periods.

Past the one-year mark, the correlation between diet length and healthy weights seemed to waver slightly, with progress more or less plateauing between 11 months and three years. But those who dieted continuously for three years or more did have the largest portion of healthy-weight individuals, at 44%. Because research shows most people who lose weight rapidly over a short time period eventually gain it back, perhaps more dieters should adopt a long-haul approach at the outset. 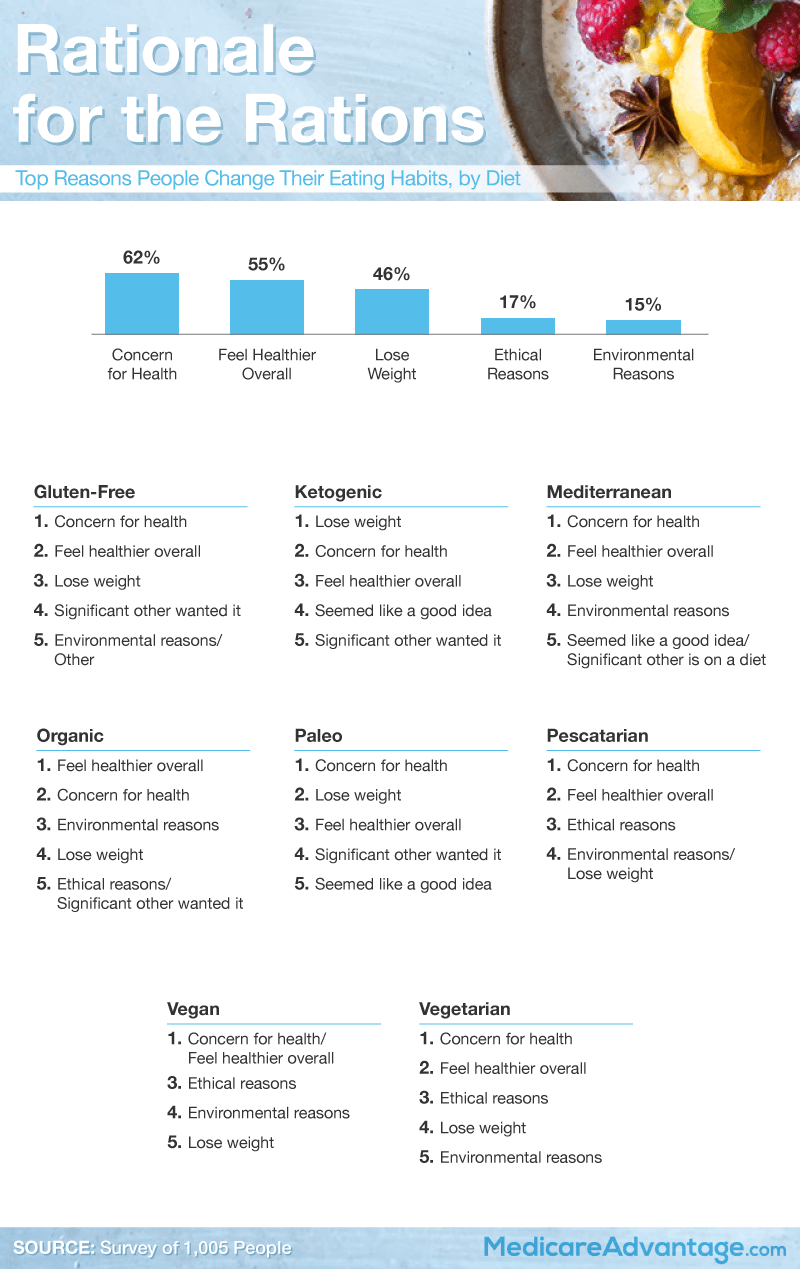 For more than 6 in 10 dieters, concern for their health prompted them to adopt a new way of eating. Similarly, 55% said they simply wanted to feel healthier, though their choice wasn't prompted by any specific issue. By contrast, ethical or environmental reasons motivated a much smaller crowd. These moral concerns ranked understandably high among vegans, vegetarians, and pescatarians, but weren't often determining factors for those who chose other kinds of diets.

Weight loss was the driving goal for another 46%, though it was the top motive for followers of just one diet: the keto approach. It was also the second-ranked concern among paleo dieters, which makes sense given the diet's strong weight-loss track record in multiple scientific studies. For a small portion of dieters, the chief incentive was far more selfless: They adopted the diet to offer solidarity to their significant others. 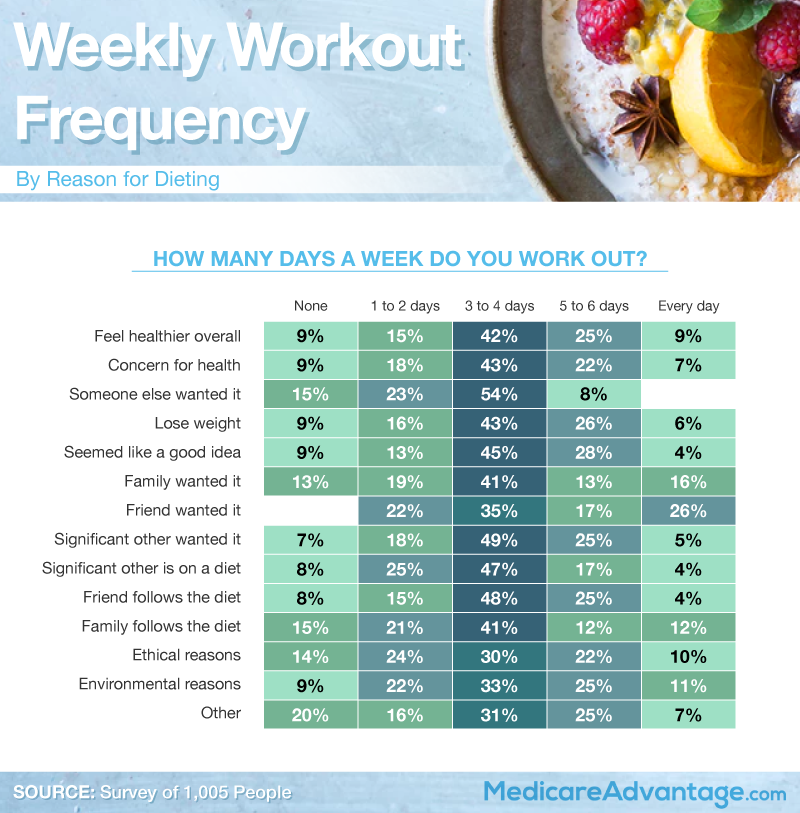 Of course, healthy living ideally entails both exercise and clean eating, and some motives for dieting seemed to prompt a rigorous workout schedule as well. Among those who started a diet because a friend urged them to, for example, a high percentage exercised daily—a testament, perhaps, to the power of a peer keeping them accountable. Other motives seemed to produce more moderate exercise schedules. Of dieters who said someone else had asked them to lose weight, a majority worked out three or four days a week.

A relatively small percentage of dieters said they didn't exercise at all—a strategy experts say can lead to weight loss in some cases. But the more proven path is an incremental approach to upping one's exercise, building in days off to avoid burnout or injury when starting a new routine. Plus, some weight loss-oriented diets can make exercise feel additionally difficult, so consuming enough protein to power you through your workout is key.

Your own diet decision

Our findings suggest broad variations in Americans' diet motives and methods and much diversity in the workout routines they adopt as well. In some respects, this variety is encouraging; because our dietary and exercise needs differ quite dramatically, we should have a host of options at our disposal. For those considering which techniques will work best, the sheer number of possibilities may seem daunting. Indecision may even lead to inaction: Unsure of where to begin, we don't start a new routine at all.

If you find yourself in this quandary, don't hesitate to seek help from a medical professional. With so many diets touted online, a qualified perspective can help you sort through the noise and steer clear of unsafe options. And if you're covered by Medicare, don't let cost concerns prevent you from seeking that expertise. At Medicare Advantage, we help you evaluate and select options from the country's most trusted health insurers. Explore our resources today to learn how much better your coverage – and costs – could be.

Using Amazon's Mechanical Turk, we surveyed 1,005 Americans who were following a diet plan. 58% of participants were women, 41% were men, and 1% didn't identify as either. Participants ranged in age from 18 to 82, with a mean of 36.1 and a standard deviation of 12.2.

Healthy weight ranges for different heights were provided by the National Institute of Health's National Heart, Lung, and Blood Institute.

Hungry to convey our findings? Share this food for thought however you please, as long as it's for noncommercial use and you link back to the authors.