When you get a cold that just won't seem to go away, or a rash shows up that you can't explain, where do you turn for advice? As it turns out, your first line of health care defense might not actually be a doctor anymore.

If you've ever turned to the internet for advice on how to manage your symptoms, you're not alone. Using digital resources to help influence our real-life care has gotten so popular it's starting to have a negative impact on how highly we value the opinions of trained professionals. Today, only 34% of Americans fully trust their doctors .

But there's one more less-than-reputable source of information that could be tainting how we judge the level of care we get in real life: television show doctors. Studies have shown medical dramas like Grey's Anatomy and The Good Doctor are changing the way both patients and doctors think about health care—and not always for the better.

To find out just how much of an impact fake TV doctors are having on real patients, we surveyed over 800 people for their opinions on characters like Meredith Grey, Derek Shepherd, and Shaun Murphy. Want to know how many people trust TV doctors more than their actual physicians, or which fictionalized hospitals they'd rather be checking into? Read on to learn more. 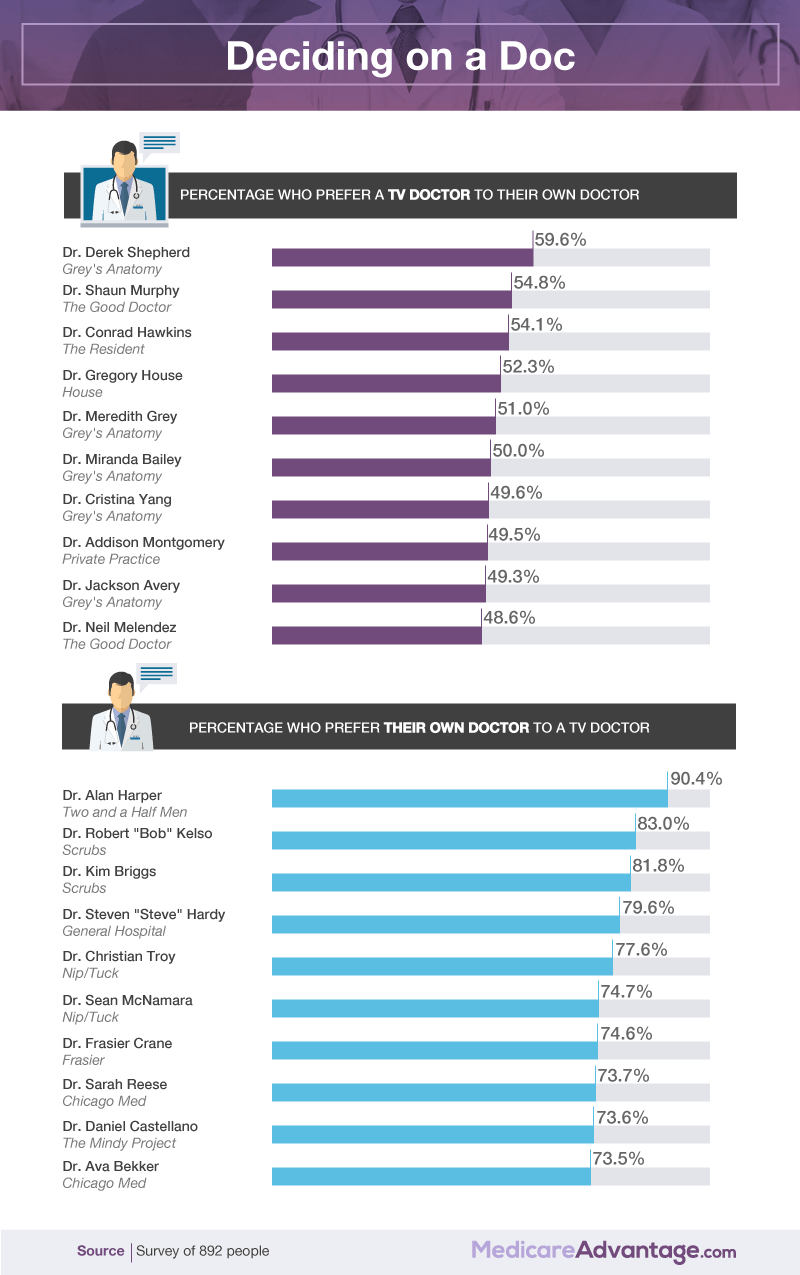 A majority of Americans may not trust their real doctors as much today as they have in years past, but there's one group of medical "professionals" that can still help save the day: TV doctors, at least to some people.

Survey participants admitted to preferring these fictional TV personas for treatment over their actual physicians. And the most endorsed doctor of all? Dr. Derek Shepherd from Grey's Anatomy. Nearly 60% of people said they'd trust "McDreamy," played by Patrick Dempsey for 11 years on the hit ABC medical drama, over their real doctor.

Dr. Shepherd wasn't alone, either. More than half of Americans would rather have Dr. Shaun Murphy from The Good Doctor, Dr. Conrad Hawkins from The Resident, Dr. Gregory House from House, and Dr. Meredith Grey from Grey's Anatomy as their physicians instead of their actual doctors.

Of course, not every doctor you see on TV commands the same respect. Ninety percent of respondents would take their own doctors over the care of Dr. Alan Harper from Two and a Half Men. Similarly, we found the doctors from Scrubs, Dr. Bob Kelso (played by Ken Jenkins) and Dr. Kim Briggs (played by Elizabeth Banks), inspired over 80% of people to prefer the advice of real doctors instead. 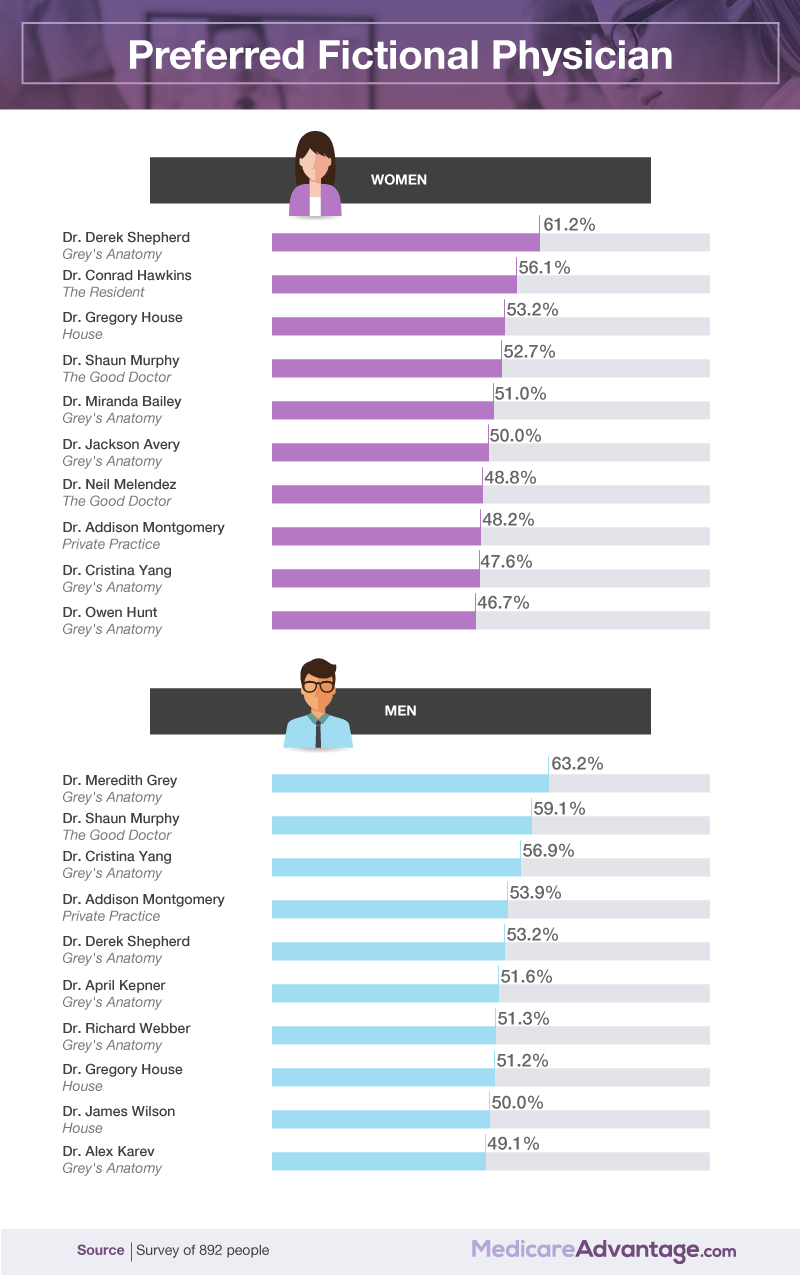 Maybe it's the hair and notoriously good looks, or maybe it was all the groundbreaking neurological treatments, but more than 61% of women voted for Dr. Derek Shepherd's care over the advice of their real-life doctor.

A majority of women also opted for the care of other prominent fictional male doctors over their own physicians. More than half admitted they'd pick Dr. Conrad Hawkins from The Resident, Dr. Gregory House from House, and Dr. Shaun Murphy from The Good Doctor if given the chance.

Men we polled were slightly more interested in a woman's touch than these distinguished male TV doctors. More than 63% voted for Dr. Meredith Grey (played by Ellen Pompeo) over the consolation of their own doctor. While 59% also picked Dr. Shaun Murphy, a medical savant with autism, more than half of men also chose Dr. Christina Yang from Grey's Anatomy and Dr. Addison Montgomery, (a neonatal specialist) from Private Practice, to cure their ailments. 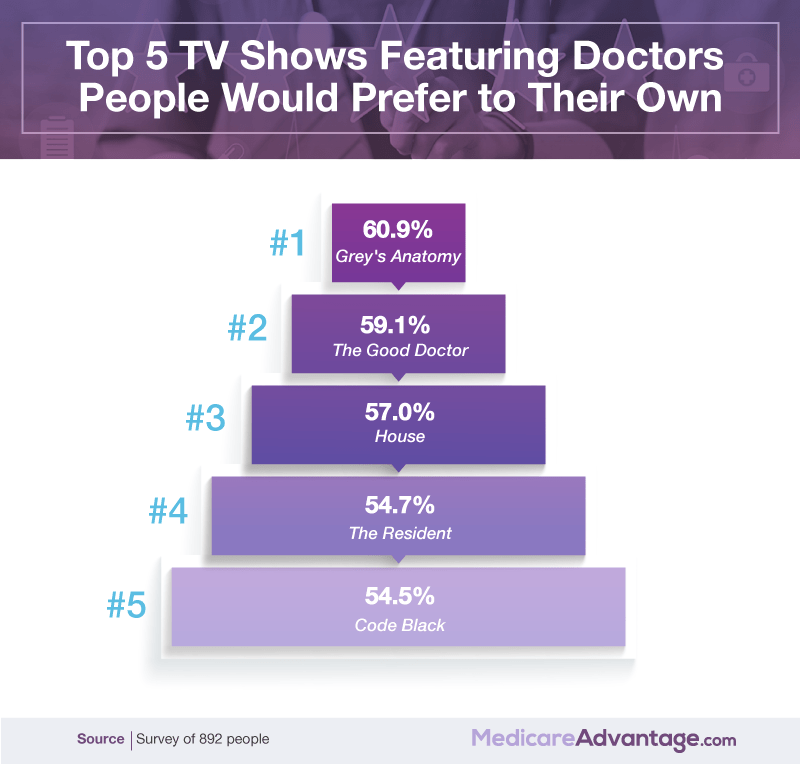 Despite having real-life medical professionals on set to help aid writers in telling believable stories, experts say the misinformation and dramatization of health care by Grey's Anatomy actually gives viewers unrealistic expectations about their own care.

That didn't stop most people from putting their trust in the show's characters, though. More than 3 in 5 Americans said they'd prefer the doctors from Grey's Anatomy over their own, followed by the doctors on The Good Doctor, House, and The Resident. 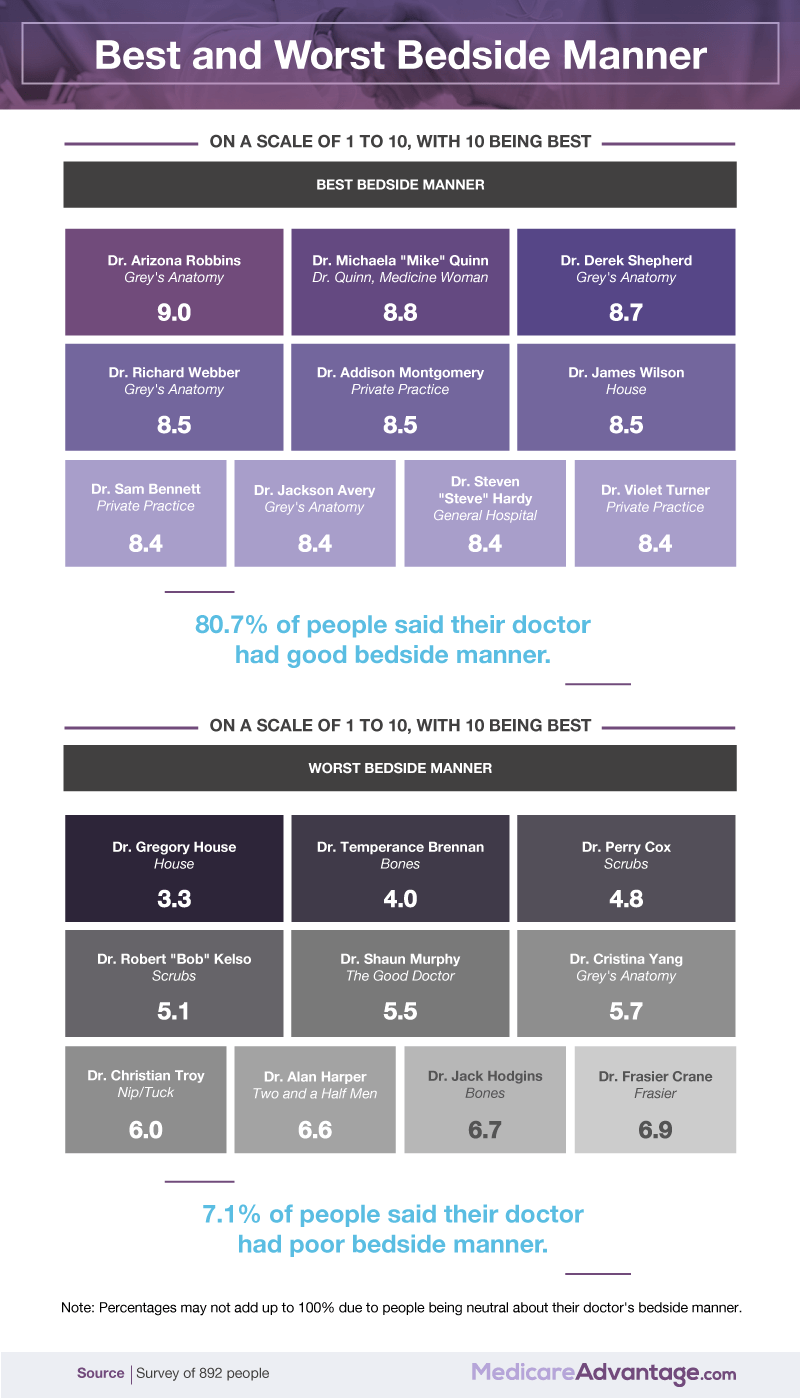 In the real world, bedside manner is one of the most important ways physicians build trust with their patients. The way doctors and nurses engage with patients is often considered a crucial part of recovery, and more than improving the way doctors and patients communicate, it can help reduce potentially fatal errors.

So what have the medical dramas on TV taught us about what good bedside manner looks like? People rated Dr. Arizona Robbins from Grey's Anatomy as having the best bedside manner on television. Played by Jessica Capshaw, Dr. Robbins (a pediatric surgeon) has been a staple on Grey's Anatomy since 2009. Despite becoming a fan-favorite over the course of her 10-season run, ABC announced Capshaw's character would not return past season 14.

Dr. Michaela "Mike" Quinn from Dr. Quinn, Medicine Woman and Dr. Derek Shepherd might also be some of the most friendly faces to help deliver bad news, but one doctor earned the lowest rating of all for his uniquely aggressive bedside manner: House. Played by Hugh Laurie for eight consecutive seasons, House's character was unconventional at best. Brilliant but blatantly rude, House's physical pain and subsequent drug use colored his patient interactions and notoriously bad bedside manner.

Easy on the Eyes 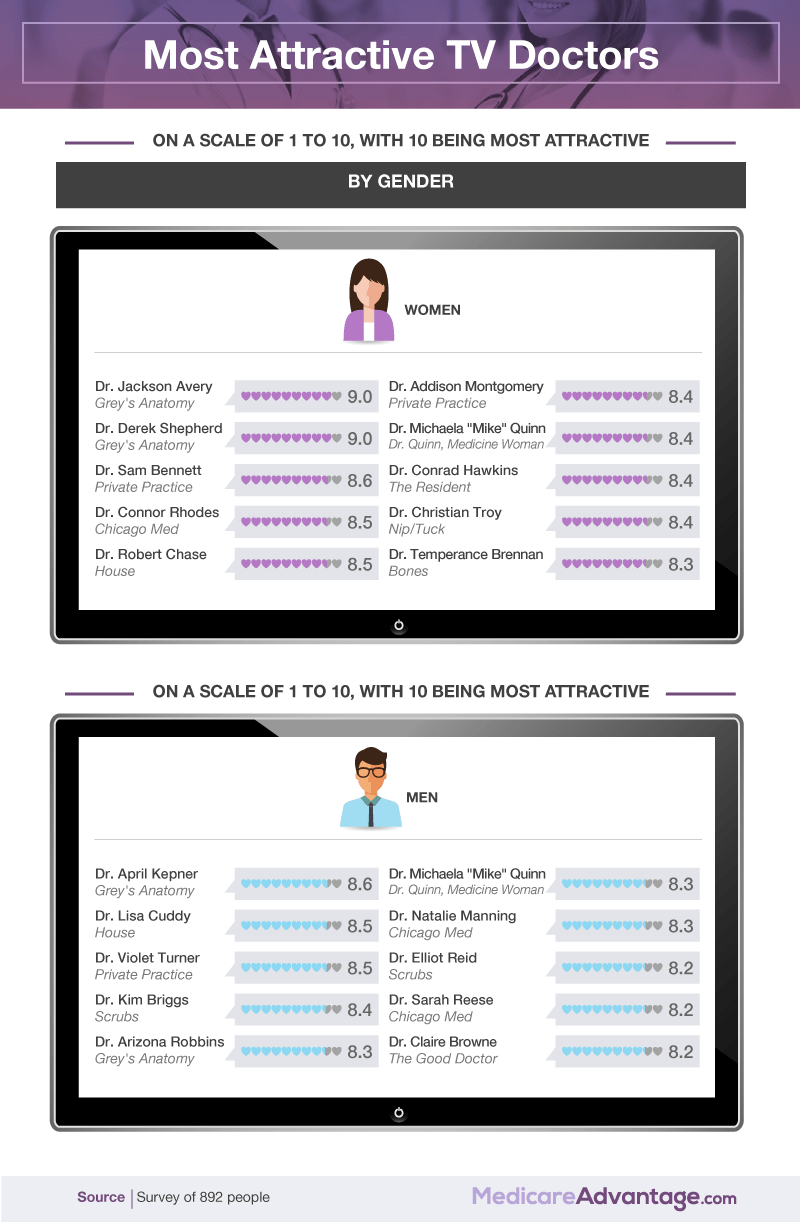 On TV shows often littered with attractive characters, it can be hard to decide which ones earn top honors as the most good-looking of all.

The men we polled rated Grey's Anatomy staple Dr. April Kepner, played by Sarah Drew, the most attractive TV doctor of all. Like co-star Jessica Capshaw, Drew's fan-favorite character will make her final exit in the show's 14th season.

Following April Kepner, men ranked Dr. Lisa Cuddy from House, Dr. Violet Turner from Private Practice, and Dr. Kim Briggs from Scrubs as being the most attractive medical professionals on TV. While studies show attractive people are assumed to be likeable, intelligent, and capable, Elizabeth Banks' character Kim Briggs was rated one of the TV doctors Americans wanted to be treated by the least.

Women we polled had a different perspective on which doctors had the best looks. Tied for first place overall, Dr. Jackson Avery and Dr. Derek Shepherd (both from Grey's Anatomy) took the top slots. Dr. Sam Bennett from Private Practice and Dr. Connor Rhodes from Chicago Med also ranked among the most attractive doctors according to women. 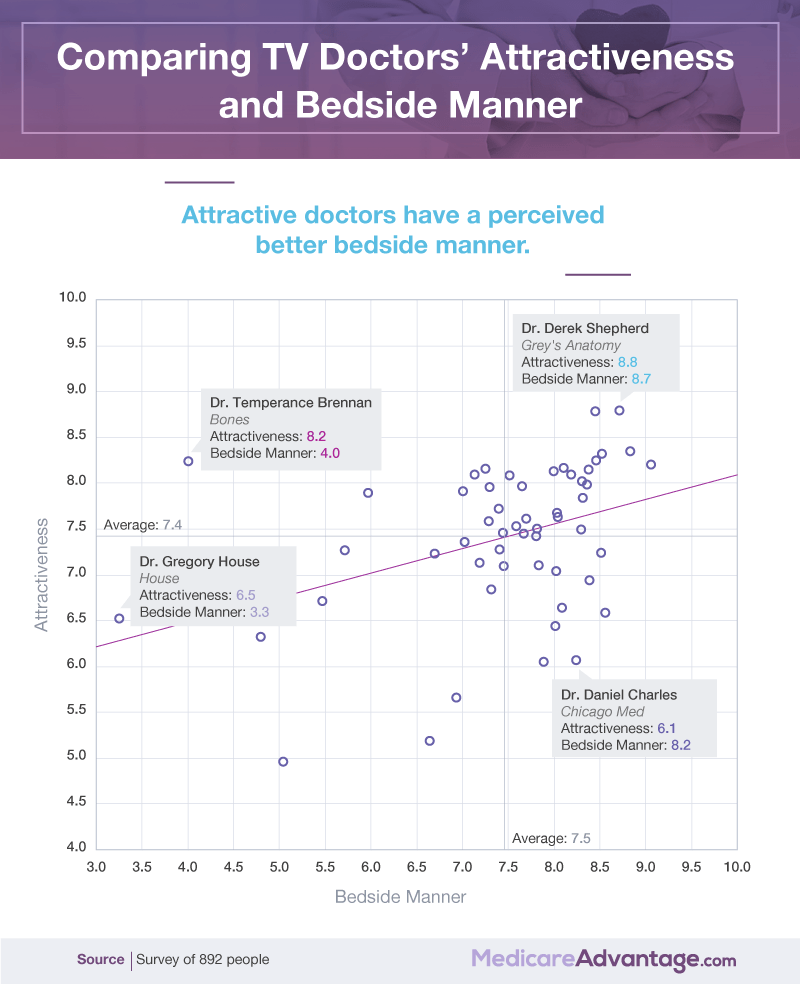 As it turns out, being easy on the eyes might have something to do with how viewers rated some of their favorite TV doctors' bedside manners.

Of course, personality could also be playing a role in how hot (or not) we rate some of these TV doctors. Studies have shown being optimistic and confident in yourself are big factors in how attractive you're perceived by other people. Doctors like Derek Shepherd, Arizona Robbins, and Jackson Avery have years on TV establishing their personalities and giving viewers a glimpse into what makes them so successful at their jobs.

Doctors with some of the worst bedside manner ratings, including House, Perry Cox from Scrubs, and Shaun Murphy from The Good Doctor, also earned the lowest scores for their attractiveness by comparison. 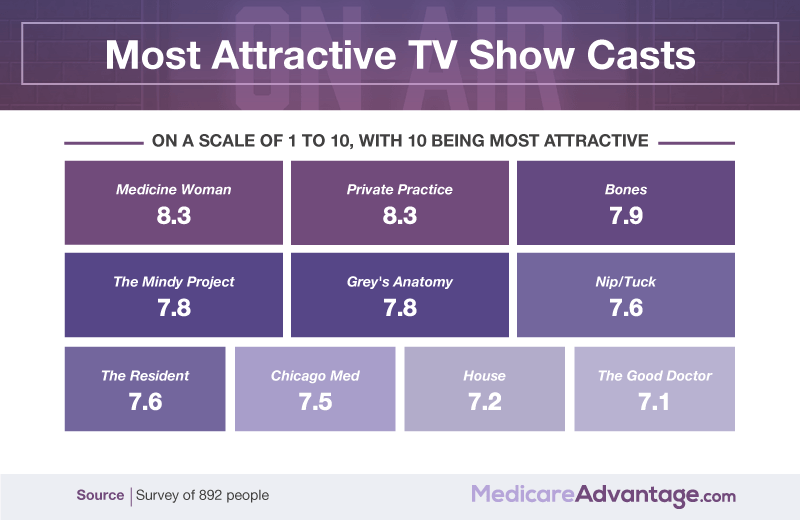 Modern shows led by female doctors like Private Practice, Bones, and The Mindy Project, starring Mindy Kaling, also ranked as having the most attractive casts by those we surveyed. Of course, even if having someone like Patrick Dempsey at your next check-up is less than likely, that doesn't mean your real doctor might not have brains and good looks. As we'll explore below, men and women have somewhat different perspectives on how attractive they find their real-life physicians. 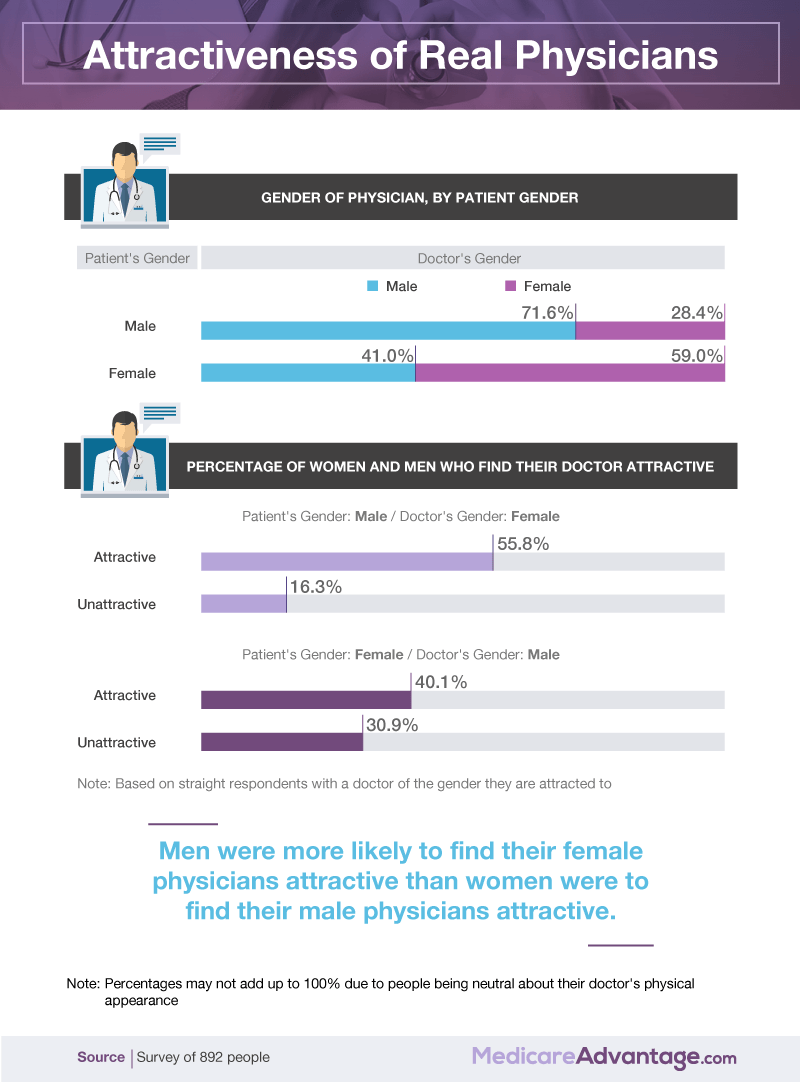 In most cases, men and women chose doctors in real-life that corresponded with their own gender. More than 71% of men said their doctors were also men, compared to 59% of women who opted for female physicians.

According to at least one study, older adults admitted to the hospital actually fared better under the care of a female practitioner. Based on the research, older adults with female doctors were both less likely to end up back in the hospital and less likely to die shortly after treatment. Meredith Grey and Arizona Robbins might be easy on the eyes, but they might also be more likely to keep you alive under certain circumstances in real life.

Men with female doctors were also more likely to see their doctors as being attractive compared to women with male doctors. The Harvard study above suggests women may provide better care because they listen to their patients more carefully and because they spend more time getting to know them. The amount of time April Kepner and Addison Montgomery from Grey's Anatomy and Private Practice have spent getting to know their patients might not be entirely realistic, but it could relate to their attractiveness rating by viewers. As our analysis of bedside manner suggests, a doctor's attractiveness could give patients a more positive outlook on their bedside manner.

Though they may not always be realistic (or even close to realistic), TV shows about doctors have always been popular. Even as one show starts to fade away or runs its prime-time viewing course, another show with a slightly different angle is always there to take its place. As our study found, some of these shows run for so long and create such a lasting impression that viewers start to trust TV doctors more than their own physicians.

When it comes to real doctors, you shouldn't have to decide between whom you trust and the care you can afford. At Medicare Advantage, we know you deserve more from your Medicare coverage. By working with several insurance companies, we'll help you expand your care with a plan that fits your needs. Medicare can be confusing, but picking the best option for your health needs shouldn't have to be. Compare your Medicare coverage now and see if a Medicare Advantage Plan is right for you at MedicareAdvantage.com.

We surveyed 892 people who currently have a primary care physician using Amazon's Mechanical Turk Service. Of our respondents, 40.7% identified as men, and 59.3% identified as women. Our respondents ranged in age from 18 to 78 with a mean age of 36.8 and a standard deviation of 11.7.

There was one attention check within the survey; respondents who failed it were disqualified from the survey, and their responses were not recorded.

Respondents were presented with a list of TV physicians at the start of the survey and asked which ones they were a fan of. Moving forward, respondents only ranked the physicians they said they were fans of. For all assets, only doctors with at least 26 fans, or respondents, were shown. Any other doctors were hidden from our presentation of data. We only focused on non-cartoon shows.

When asked to choose between their own doctor and a fictional doctor, respondents were given the option to pick the TV doctor or their own physician. Respondents only saw doctors they said they were fans of at the start of the survey.

For bedside manner, respondents were presented with a scale that looked like this:

For the purpose of presenting the answers in this project, we converted the 7-point scale into a 10-point scale to be better understood by our audience. To do this, we took the score given, divided it by 7, and then multiplied it by 10.

This project has not been tested for statistical significance and should be for entertainment purposes only.

Do you know a fan of "McDreamy" who would enjoy this project? Feel free to reshare for noncommercial use as long as you link back to this page and its authors to attribute proper credit.